Winter finally came calling in Colorado’s high country on Thursday, as Arapahoe Basin saw 9 inches of new snow and was able to crank up its snow guns in a significant way. 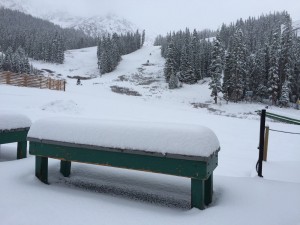 Colorado ski areas have been basking during a warm, dry fall perfect for mountain biking and hiking, but that all ended with a wet, warm winter storm that rolled up from the Southwest and coated Colorado’s ski resorts with much-needed moisture.

“This is good,” Arapahoe Basin COO Alan Henceroth wrote on his blog on Friday. “We received 9” of new snow the last 24 hours. Beautiful, good stuff. Great for the Earth. Great for future snowmaking. Great for skiing this season.

“We made snow last night on the upper half of High Noon. It is still a little warm at the very bottom. At the coldest point in the evening last we had 10 fan guns running. Right now, the upper 5 fan guns around Black Mountain Lodge are making snow.The forecast shows a notable drop in temperature around dusk this evening. Let’s keep our fingers crossed for a good, cold night.”

A-Basin opened on Oct. 17 last season but still hasn’t announced an opening day for this season. Loveland Ski Area, which also tries to open in October each season, has yet to set its opening day.
“7″ of new snow fell last night on Loveland giving us 14″ in 24 hours,” Loveland posted on its website Friday. “The snowcats are up packing down the upper part of the mountain. Conditions are looking great on Catwalk and Mambo. We still have a good amount of snow to make on Homerun. Our snowmakers are working around the clock right now making snow. The forecast is looking good for some more productive nights of snowmaking.”
According to Opensnow.com, more winter weather is headed this way next week: “The weekend will be dry, so head out and have some fun. Then we’ll see another storm on Monday into Tuesday with perhaps another 2-4 or 3-6 inches for mountains above 10,000 feet, and then we could see another storm around Friday 10/30 or Saturday 10/31 (Halloween).”

Copper Mountain, which has been making snow for weeks on its U.S. Ski Team Speed Center full-length speed course in order to host training ahead of its Nov. 6 public opening and team naming event, announced on Friday that — even with the new snow on Thursday — it will have to postpone that event due to the lack of snow in Colorado.

The U.S. Ski Team tech skiers, according to Copper Mountain, will stay in Europe after the World Cup opener in Soelden, Austria, this weekend, and train until slalom races scheduled for Nov. 13-14 in Levi, Finland. Now Copper’s team naming and NASTAR Pacesetting Trials will be held Nov. 19-21 instead of Nov. 6-8. The ski area is still scheduled to open to the public on Friday, Nov. 6.

Keystone, a Vail Resorts ski area on the company’s Epic Pass, is also slated to open on Nov. 6.

Epic Pass Offers Unlimited, Unrestricted Skiing for $809
The Epic Pass offers guests access to unrestricted, unlimited skiing for the 2015-16 winter season to the premier ski resorts in the U.S. Available for just $809 for adults and $419 for children (ages five to 12), pass holders gain unlimited, unrestricted access to more than 32,000 acres at Vail, Beaver Creek, Breckenridge, Keystone and Arapahoe Basin in Colorado; Park City in Utah; Heavenly, Northstar and Kirkwood at Lake Tahoe; Perisher in Australia for the 2016 season there; Afton Alps in Minnesota; Mt. Brighton in Michigan; and up to five free consecutive days when staying at in-resort accommodations at Verbier, Switzerland.

Save Up to 30 Percent on Lodging
Guests who reserve lodging accommodations by opening day receive up to 30 percent savings.  From family-friendly accommodations at Keystone and ski-in, ski-out lodging at the foot of Breck’s famed Peak 8, to award-winning, luxury accommodations in the heart of Vail and Beaver Creek, guests are invited to customize a vacation experience of a lifetime at Colorado’s four major resorts by visiting Snow.com.