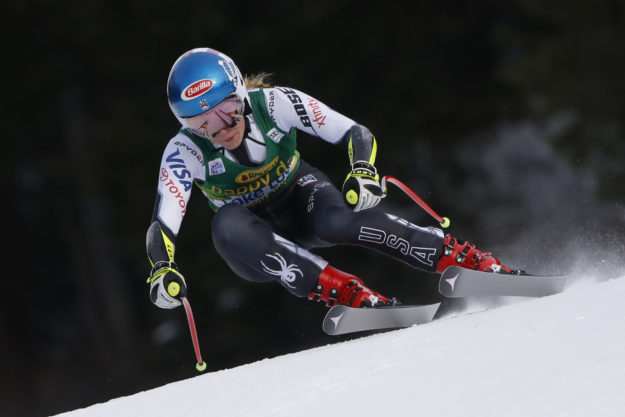 EagleVail’s Mikaela Shiffrin won the 46th World Cup race of her career on Sunday — a super-G in Lake Louise, Canada — while closer to home Park City’s Ted Ligety turned in a top 10 finish in the Xfinity Birds of Prey World Cup giant slalom at Beaver Creek.

For Shiffrin, the super-G gave her an unprecedented win in all six ski-racing disciplines and tied her for fourth on the all-time women’s victory list with Austria’s Renate Goetschl. Here’s the U.S. Ski Team press release on Shiffrin’s win:

Mikaela Shiffrin (Avon, Colo.) has proven once again that she is the best athlete in the world with a historic FIS Ski World Cup super-G victory in Lake Louise, Alberta, Sunday as she became the first ski racer ever to win in all six World Cup disciplines – slalom, parallel slalom, combined, giant slalom, super-G, and downhill.

“It was one of my big goals to win in every discipline when I first started racing…one of those goals that you don’t think you’re ever going to achieve, and it’s incredible,” Shiffrin said. “This season I’m still going to race just some super-Gs, but here in Lake Louise, I have a really good feeling. I have to be in the right mindset, so I plan to ski the super-G in St. Moritz (Switzerland), but then it’s up in the air.”

With her 46th career World Cup victory – and her first super-G World Cup win – she moved into a fourth-place tie with Austria’s Renate Götschl on the all-time women’s World Cup win list. Only teammate Lindsey Vonn (Vail, Colo.) with 82 victories, Austria’s Annemarie Moser-Pröll with 62, and Switzerland’s Vreni Schneider with 55 are ahead of her on the all-time victory list.

Sunday’s victory came in only her ninth career World Cup super-G start, and after trailing early leader Viktoria Rebensburg of Germany at the first interval by a slim 0.20 seconds, she turned on the aggressive afterburners, taking the “bad girl line.”

Rebensburg eventually settled for third after Norway’s Ragnhild Mowinkel, who started 19th, crossed the line in second at 0.77 seconds off the pace set by Shiffrin.

With three top 10 results in the past three days, including eighth in Friday’s downhill and fourth in Saturday’s downhill, Shiffrin increased her overall World Cup lead to 238 points over Switzerland’s Michelle Gisin, who currently sits in second, and Austria’s Nicole Schmidhofer in third.

Up next, the women’s tour moves back to Europe next weekend (Dec. 8-9) with super-G and parallel slalom events in St. Moritz, Switzerland. Both events will be broadcast and stream live on the networks of NBC, including the Olympic Channel – Home of Team USA – the NBC Sports Network, and the NBC Sports Gold app.

And here’s the U.S. Ski Team release on Sunday’s Birds of Prey GS:

“It was awesome,” said Ligety, a five-time giant slalom winner at Beaver Creek, about having four American’s in the second run. “I’m really close with this group of guys and it’s been fun incorporating Brian (McLaughlin) into our group and awesome to see him actually stepping it up on race day. He’s been skiing fast all summer in training … and I’m really excited to have another guy in there.”

“They have been awesome to me,” said McLaughlin of his recent training with the U.S. Ski Team, a Green Mountain Valley School graduate who is skiing independently this season after spending a few years on the U.S. Ski Team Development squad, then the National University Team, and Dartmouth, where he was NCAA giant slalom champion in 2018. Along with the NCAA giant slalom title, he also grabbed the NorAm giant slalom title with guaranteed World Cup starts for the 2018-19 season. “They have been treating me as part of the team and it’s worked out really well so far.”

“It’s pretty sweet being able to do your first World Cup in your backyard, so I was pretty pumped on it,” said Negomir. “I grew up working this race; I was setting B-net and slipping. And I foreran the GS here last year. It’s cool. It’s tough running in the back, but there is not as much pressure because you just go out and ski as hard as you can because you have got nothing to lose.”

Up next, the men’s World Cup circuit moves back to Europe with giant slalom and slalom races in Val d’Isere, France. Both events will be broadcast and stream live on the networks of NBC, including the Olympic Channel – Home of Team USA – the NBC Sports Network, and the NBC Sports Gold app.

Fans can catch all the action in spectacular high definition via NBC Sports online at NBCSports.com/Live or through the NBC Sports app which is available on the iTunes App Store, Google Play, Windows Store, Roku Channel Store, Apple TV and Amazon Fire. Exclusive commercial-free coverage will be available for subscribers of the NBC Sports Gold Pass, available here: https://www.nbcsports.com/gold/snow