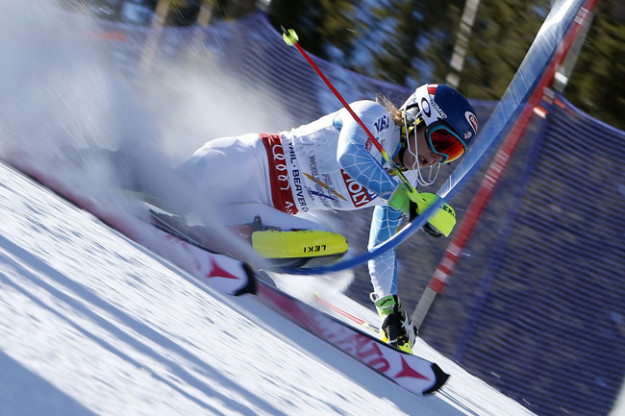 Sunday at Lake Louise, Vail’s Lindsey Vonn will be going for her 18th World Cup win at the venue in Alberta, Canada, and her women’s overall record 70th career World Cup win. That’s because on Saturday she won for the 17th time on what’s been dubbed the “Lake Lindsey” track, claiming her second straight downhill of the weekend by more than a second over second-place finisher Fabienne Suter of Switzerland.

Vonn, 31, will be going for her third Lake Louise sweep on Sunday, having won both downhills and the super-G in both 2011 and 2012. Eighteen wins at one venue is by far a record on the circuit and would match the number of career wins for the American woman who’s won the second-most career World Cup races, Tamara McKinney.

Closing in quickly on that same number is Eagle-Vail’s Mikaela Shiffrin, who has 17 career wins at the age of 20 (16 in slalom and one in giant slalom) and will be going for 18 Sunday in her first ever World Cup speed event, the super-G.

At a media event earlier this week at Avon’s Westin Hotel hosted by her major sponsor, Barilla Pasta, Shiffrin said she’s adding super-G and combined (one run or slalom combined with one speed event) in order to compete for the overall World Cup title for the first time.

“After [last] weekend [in Aspen, where Shiffrin won two slalom races], I’d say it is fairly realistic,” Shiffrin said of winning the overall title. She leads Switzerland’s Lara Gut 280 points to 222. Vonn is now third with 200 points after picking up 100 points each for winning two consecutive downhills.

“It’s a reasonable goal to shoot to win the overall,” Shiffrin added. “If I can keep my slalom going the way it is, and in GS if I can find the finish but keep the same amount of courage in those races, and then if I can get some points in the super-G, that will definitely help along the way. The combined events favor the slalom skiers.”

Only two American women have ever won the overall World Cup title — Vonn three times and McKinney once. Asked if a more technical super-G than Lake Louise would better suit her style, Shiffrin said she’s been training for the event on all types of terrain.

“Since I’m a technical skier and have been for the past few years, if I was to race my first super-G ever and it was my first day on super-G skis, I would choose a more technical hill over Lake Louise, which is higher speed and a glider course,” Shiffrin said. “But I’ve had a little bit of time on the skis now. It’s a little bit trickier for me to keep my skis pointed down the hill versus turning too much. That’ll be something I have to keep in mind going into this race.”

“The plan is to do those races and quite a few of the super-G’s starting with Lake Louise,” Shiffrin said. “I’m kind of anxious to get my first World Cup super-G out of the way.”

The Shiffrin, Vonn overall title chase could be one of the best story lines on the women’s World Cup circuit in years, especially with both athletes calling the Vail Valley home.