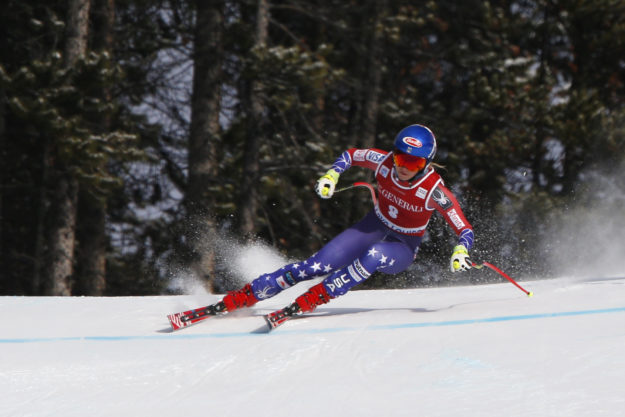 With 18-time Lake Louise winner Lindsey Vonn of Vail coming back from an injury-plagued 2016 season, all signs pointed to an American downhill victory this weekend in Canada. Who knew it would be Eagle-Vail’s Mikaela Shiffrin?

Maybe everyone should have known after the slalom superstar climbed onto her first speed-event podium by finishing third in Friday’s downhill at Lake Louise — a race that saw Vonn crash near the bottom while closing in on the win.

Vonn bounced back to race on Saturday, but the injury clearly affected her and she finished 12th. Shiffrin again shocked the world with the win.

Meanwhile, American men continued to underwhelm on home snow at Beaver Creek, failing to crack the top 20 in the Birds of Prey downhill won a record-tying sixth time by Norway’s Aksel Lund Svindal.

The men close out the weekend of racing action with the first fun of giant slalom at 9:45 a.m. Sunday on the Birds of Prey course. Park City’s Ted Ligety is looking for his record-tying 6th GS win at Beaver Creek.

The women finish up with a super-G at Lake Louise on Sunday.

Here’s the US Ski Team press release on Shiffrin’s stunning win in Canada:

With her win on the Olympic Downhill course and her slalom victory last weekend in Killington, Vermont Shiffrin proved that she is the best ski racer in the world six World Cup races into the Olympic season. The defending World Cup champion also extended her overall World Cup lead over Germany’s Viktoria Rebensburg to 149 points. This must now raise the question, is Mikaela Shiffrin the most dominant athlete in the world right now?

Rebensburg, the winner of the first two World Cup giant slalom races of the season, including last weekend in Killington, finished second Saturday. Swiss Michelle Gisin moved up from her eighth-place finish in Friday’s downhill, to round out the podium in third. Austria’s Cornelia Huetter, the winner of Friday’s downhill in Lake Louise, was fourth.

Saturday’s race was delayed one hour and 15 minutes due to a sub-station fire that knocked out power to the resort. Fortunately, the athletes were towed to the start thanks to a fleet of Prinoth snowcats at the resort.

And some more on the men’s race:

Watch same-day coverage of the men’s downhill at 5:00 p.m. EST on NBC

The Bird of Prey wraps up Sunday with a giant slalom. Ted Ligety (Park City, UT), who has won an unprecedented six times on the Birds of Prey track, will lead the Americans.