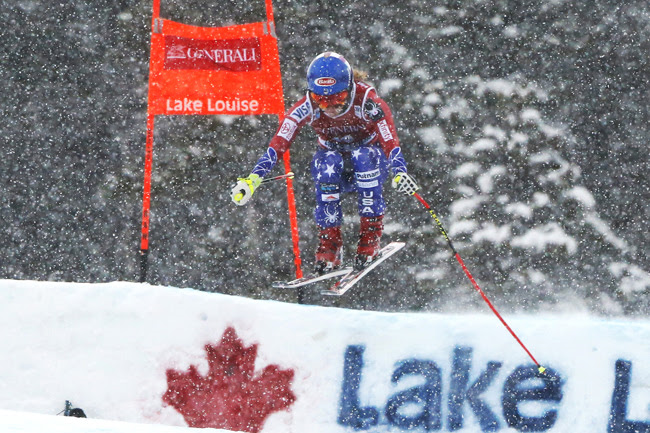 Mikaela Shiffrin finishes third at a downhill in Lake Louise on Friday (US Ski Team photo).

Eagle-Vail’s Mikaela Shiffrin stole the spotlight from the men’s World Cup action on her home mountain of Beaver Creek, stunning ski racing fans by landing on her first ever speed-event podium in a downhill at Lake Louise, Canada on Friday.

The tech specialist who excels in slalom and giant slalom finished third on Friday and added to her overall World Cup lead. Vail’s Lindsey Vonn, meanwhile, appeared poised to win for the 19th time at Lake Louise (and bump Shiffrin to fourth) but crashed near the bottom of the course.

“Well that hurt… had a nice lead the whole way down but caught my inside ski. That’s ski racing though!” Vonn tweeted Friday. “I’ll be sore [Saturday] but will rest up tonight and barring anything major I will be racing. Can’t keep me down! Congrats on the podium [for Shiffrin] today too.”

“Fence- 0, @lindseyvonn – 1 That looked nasty, SO relieved to see you ski away from that!” Shiffrin tweeted back.

Back home on the mountain where Shiffrin won a world championship gold medal in slalom in 2015, the U.S. men’s team struggled on the famed Birds of Prey course Friday, with two-time Olympic medalist Andrew Weibrecht the top finisher in the super-G in 21st position.

They hope to redeem themselves in the downhill race at Beaver Creek on Saturday at 11 a.m. The race is free and open to the public, and will be followed by a giant slalom (first run 9:45 a.m.) on Sunday. Go to the official Birds of Prey World Cup website for more information.

Surprise performances are nothing new for Mikaela Shiffrin in slalom and giant slalom events. But Friday’s third-place finish in the first downhill of the FIS Ski World Cup season just may be the biggest surprise yet in the young career of the defending overall World Cup Champion.

Austria’s Cornelia Huetter took the win Friday, a career-first World Cup downhill victory and her second career World Cup win. Tina Weirather of Liechtenstein finished second. For Shiffrin, her third-place finish was a career-first podium in a speed event.  Lindsey Vonn was well on her way to her 19th Lake Louise World Cup victory after leading at all four intermediate times, but crashed hard into the safety netting near the finish. Vonn was able to get up and ski to the bottom of the course.

With a steady snow falling, Shiffrin came out of the 10th start position and absolutely nailed the lower portion of the Olympic Downhill course to move into the race lead. However, Weirather, starting 13th, nipped her at the line by 0.21 seconds. Huetter, starting 15th, displayed masterful technical skills to best Weirather by 0.09 seconds and take the win.

The women race another downhill Saturday, followed by super-G Sunday at Lake Louise.