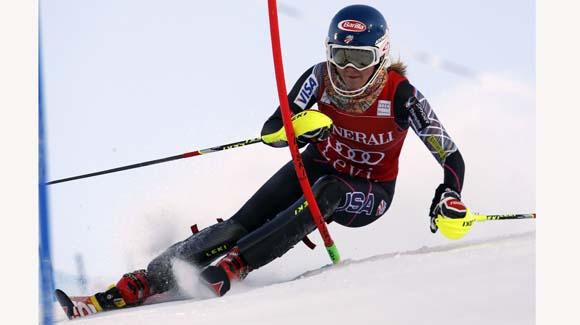 It was the fifth career World Cup win for the 18-year-old Shiffrin in just her third season, and landed her the unusual prize of a reindeer.

Shiffrin was the only racer in the field to crack 58 seconds in both runs of slalom, but she said she was fortunate to finish the first run in swirling winds that kept the other two American competitors out of the top 30.

“Maybe I was a little bit lucky in the first run,” she said. “I can’t even really remember it. I just wanted to take the second run like its own race and really hammer it. I was in the gate and like, ‘No mercy, charge down this course,’ and I think I did.”

“There’s definitely some relief there,” said Shiffrin, who also leads the overall chase after just two races. “One of my goals is to keep my slalom standings, and it’s nice to know I’m not that far off.”

Shiffrin, who was sixth to open the season in a giant slalom in Soelden, Austria, last month, joins Vail’s Lindsey Vonn as the only other American to have won in Levi. America is now the only nation with multiple victories at the Finnish resort.

Shiffrin is also rapidly climbing the all-time wins list for American women, tying Kiki Cutter and Christin Cooper with five career victories. Koznick, an Edwards resident, and Vail’s Cindy Nelson, are next on the list with six career wins.

And if she wasn’t already, Shiffrin on Saturday firmly established herself as an Olympic medal favorite in slalom at the Winter Games in Sochi, Russia, early next year.

Only five American women have medaled in the Olympic slalom and none since Barbara Cochran won slalom gold in 1972 at Sapporo, Japan. Three American women, including Andrea Mead-Lawrence (St. Moritz, 1948) and Gretchen Fraser (Oslo, 1952) have won gold in slalom.

The women’s World Cup tour now moves to Beaver Creek for a downhill, super-G and giant slalom Nov. 29-Dec. 1. The events will test the newly completed Raptor course, which will host all women’s competition during the 2015 FIS Alpine World Ski Championships.

Vonn, who skipped the first two races of the season in Soelden and Levi to train in Colorado, will make her comeback from knee surgery at the Beaver Creek races.