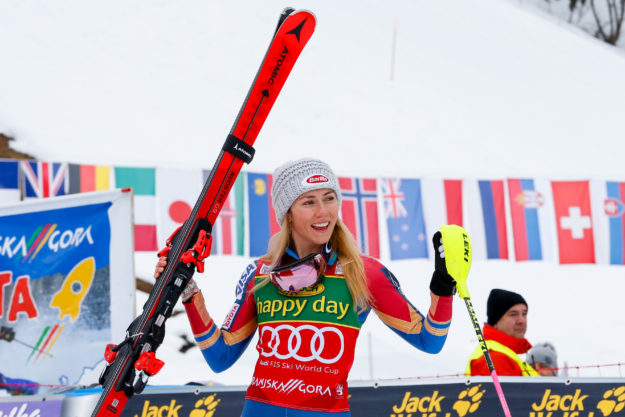 Amazing skiing by @MikaelaShiffrin!! She wins her 40th career victory by 1.64 seconds! And she’ll be crowned the golden 🦊 here. 🔥🔥🔥#GoldenFoxTrophy

The massive margin of victory prompted this Twitter praise from one of the greatest U.S. ski-racing Olympians of all time, Julia Mancuso:

Spoil alert😂 @MikaelaShiffrin is amazing! Continues to dominate and impress! 🙌

Shiffrin is also just two wins from her total for last season of 11 victories, when she captured her first overall World Cup title, and just three from tying Vonn’s single-season American record of 12 victories.

Only five other women and six men have won 40 or more times on the World Cup circuit, and only two of them are still active — Vonn and Austrian great Marcel Hirscher.

Shiffrin now has a more than 700-point lead in the overall chase — 1,281 to Wendy Holdener’s 560 — and is well on her way to securing her second overall title.

Only two other Americans — Vonn with four and Phil Mahre with three — have won more than two overall World Cup titles.

And Shiffrin is the clear and obvious favorite in several events at next month’s Winter Olympics in Pyeongchang, South Korea, where she hopes to become only the second American to win two Olympic gold medals in alpine ski racing, adding to the slalom gold she won four years ago in Sochi.

The only other U.S. two-time gold medalist, Ted Ligety, will be going for his third.

A day after battling for her 39th World Cup victory, Mikaela Shiffrin (Eagle-Vail, Colo.) made it look easy, cruising toward World Cup history with her 40th victory in Sunday’s slalom at Kranjska Gora, Slovenia.

Brushing aside a flu bug, rainy weather, and rough course conditions, Shiffrin opened up a 1.47-second first run advantage and never looked back. Starting last in the second run, she extended her winning margin to 1.64-seconds over Sweden’s Frida Hansdotter, who finished second, and 1.87 seconds over Switzerland’s Wendy Holdener in third.

“I really loved the surface the first run,” Shiffrin said. “It got warmer in the second run and a little bit more of a track, but I actually thought it held up quite well. I had so much fun skiing today!”

Shiffrin is undefeated in 2018, winning the past four World Cup events, including two slalom victories, one giant slalom and a city event win in Oslo, Norway on New Year’s Day. She also won the Snow Queen title for her slalom victory in Zagreb, Croatia on Jan. 3, and following her giant slalom and slalom wins in Kranjska Gora, was awarded the Golden Fox, which goes to the best-combined finisher from the slalom and giant slalom.

“It’s really incredible to be the Golden Fox again,” Shiffrin said. “That one is definitely important to me … to be the best performer in the GS and the slalom through the weekend is really cool. That’s been one of my goals for so long, and it’s really, really an honor. But at the end of the day, it’s just a title and I still have to go back to work tomorrow.”

At 22-years-old, Shiffrin has reached another milestone in her ski racing career, equaling Ingemar Stenmark’s 40 wins before his 23rd birthday. Annemarie Moser-Pröll totaled 41 World Cup victories before turning 23. With four slalom and four giant slalom events remaining before Shiffrin turns 23 on March 13, the door is wide open for her to make World Cup history.

Since her World Cup debut as a 16-year-old on March 11, 2013, in Spindleruv Mlyn, CzechRepublic, Shiffrin has racked up some impressive stats, including:

Up next, the women’s World Cup circuit moves to Flachau, Austria Jan. 9 for an evening slalom where a victory would tie Shiffrin with Moser-Pröll’s 41 World Cup victories before turning 23.

“I’ve had some incredible races there … and I’m looking forward to going back there,” Shiffrin said. “The hill is one of my favorites, and when it’s in good condition, it’s really fun to ski.”