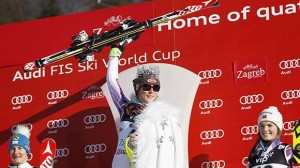 Shiffrin won in dominating fashion, leading the first run by .80 seconds and expanding that lead in the second run for a 1.68-second margin of victory over Austria’s Kathrin Zettel.

The win launched Shiffrin into second in the Audi FIS Ski World Cup overall chase behind Slovenia’s Tina Maze (545 points to 777 for Maze). Only a single point now separates Shiffrin from the slalom lead held by Sweden’s Frida Hansdotter.

“Both runs today I had so much fun,” said Shiffrin, who repeated the win she earned in Zagreb two years ago on a hill she enjoys.

“Snow Queen is a nice title,” she added. “More than that, I really like this hill. I like the challenge. It’s a little bit steep, a little bit flat – you have to work it all the way down. The crowd is incredible. It’s a classic race where the fans love to watch ski racing.”

For the second straight race, Shiffrin served notice that equipment issues that plagued her earlier in the season have been resolved.

“I feel really good on my equipment right now,” Shiffrin said. “Having to test a little bit and see what’s out there and what works for my style was probably the best thing I could have done — learning more about my own skiing and learning how to work with Atomic better. They have been so incredibly supportive. I feel I have the best setup in the world.”

Shiffrin spent time with Atomic in Santa Caterina over the holidays testing equipment and dialing in settings to get to the point where she’s now extremely comfortable with her setup.

The tech teams get a short break before competing again under the lights in Flachau, Austria on Jan. 13 – the final tech event before the World Championships in Vail/Beaver Creek Feb. 2-15.