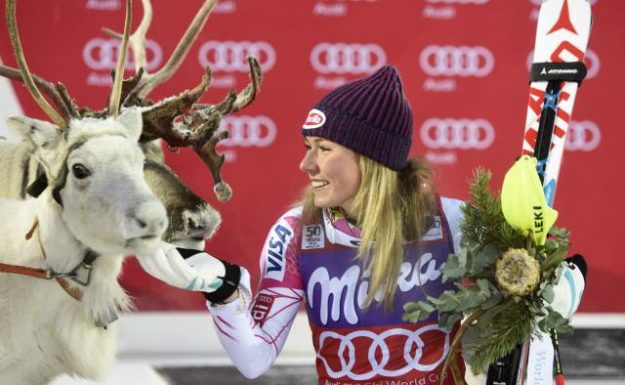 Shiffrin, coming off a knee injury last year that cost her most of the season, has now won 21 times on the World Cup circuit at the age of 21 and is the defending Olympic and two-time world champion in slalom. Twenty of her 21 career wins have come in slalom, with the only other victory in giant slalom.

Shiffrin is coming off a second-place finish in GS last month in Soelden, Austria.

Next up for the women’s circuit is a rare U.S. East Coast World Cup stop in Killington, Vermont, where a GS and slalom will be contested Nov. 26-27. Shiffrin, who lives in Eagle-Vail but has family roots in New England, will be a podium favorite in the GS and a heavy favorite to win the slalom.

The Killington races replace the traditional Thanksgiving technical events for women in Aspen, which instead will host the World Cup Finals in March.

Also later this month, Lake Louise, Canada, will host its traditional men’s and women’s speed events of super-G and downhill. But it’s doubtful that Vail’s Lindsey Vonn will be able to compete on a track she has owned over the years.

Vonn on Thursday broke her arm while training at the U.S. Ski Team Speed Center at Copper Mountain, where she has previously suffered knee injuries.

Vonn, the all-time greatest women’s ski racer in terms of overall World Cup victories with 76, is chasing the overall men’s mark of 86 wins held by Sweden’s Ingemar Stenmark. She had surgery Thursday night in Vail, and has not announced a timetable for returning to action.

“Unfortunately, yesterday I crashed while training in Copper and severely fractured the humerus bone in my right arm,” Vonn wrote on Facebook Friday. “I had successful surgery last night in Vail and everyone took great care of me. While I am beyond frustrated by this latest setback, at least my knees are ok and I will return to the slopes as soon as possible, as I always do! Thank you for the continued love and support, it means so much to me. xo LV.”

Shiffrin channeled early race day nerves to work in her favor. “I didn’t have many expectations. I was quite nervous this morning,” recalled Shiffrin.

“I just tried to put it aside, put my head away and just ski really hard. I made a few small mistakes—a couple things that hopefully the next race I can clean up a little bit. I know these other girls aren’t going to wait around. They’re trying to beat me, so I have to keep going.”

Much like Soelden, Levi is a bit of an outlier race on the World Cup circuit—no one really knows where they are until it happens. Though Resi Stiegler (Jackson WY) typically struggles with losing time in the final split, she was able to make up some time at the bottom of her second run, skiing into a solid 16th place.

Prior to the race, Stiegler she noted that she was still working on dialing in her skiing and body for the season, but she is relieved to have the first race in the books.

“First run I think I had some nerves,” said Stiegler. “Then second run I was like, ‘It’s time to improve. Let’s just ski better second run and not worry too much about the result today,’ and it was better. There are still some things I need to work on, but I’m happier that I improved for that run. It’s so beautiful here and it’s nice to have some winter conditions finally. Everything feels really good. The snow was excellent—it’s nice, hard snow—and a great atmosphere.”

The final American starting in Saturday’s slalom and a relative newcomer to the World Cup circuit, Lila Lapanja (Incline Village, NV), had solid top splits that would have had her well into qualification for a second run but struggled moving forward coming on to the pitch, causing her to get low and behind. She’ll walk away knowing that she has the speed to hang with the top 15.

The men race slalom Sunday with David Chodounsky (Crested Butte, CO) looking to charge hard and make his mark in this deep men’s tech field. Stream the race live on nbcsports.com and watch the race on Universal HD at 2:30 p.m. ET.