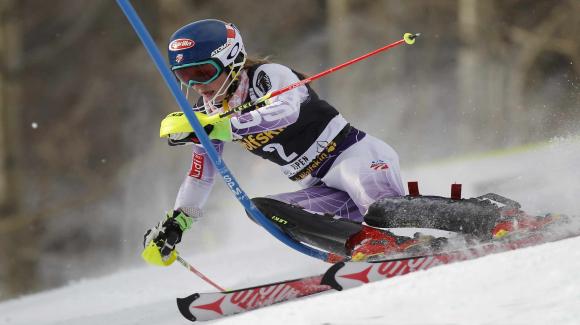 Eagle-Vail’s Mikaela Shiffrin, leading after the first run, wound up a disappointing fifth behind winner Nicole Hosp of Austria Sunday in a World Cup slalom at Aspen.

“I skied a little bit slower than Nicki Hosp did,” Shiffrin told NBC after the race. “It was a really great course. I didn’t quite give myself enough room and push to keep my skis going.”

Shiffrin cited a case of nerves heading into the first run in the morning, but said she wasn’t quite as jittery in the afternoon.

“Not as bad in the second run,” the two-time defending World Cup slalom champion said. “The first run helped to know that even skiing nervous and with a few mistakes I’m still one of the fastest in the world, but I have a little bit of work to do with my slalom and I knew that coming into this race. The result’s OK and I have some training to do.”

Shiffrin showed no nerves earlier this year in Sochi when she became the youngest woman ever to win the Olympic slalom title. Now she’ll try to win her second world championship later this season on her home mountain of Beaver Creek at the World Alpine Ski Championships Feb. 2-15.

“It’s better to have the nerves now than February. I think slalom is the hardest event; you have to do it every day to get good at it. I had to think about the best skiing I’ve had. Slalom is there—it’s in my muscles—and I know I can do it,” Shiffrin said, adding she’s handling her disappointment better than in Levi, Finland, earlier this month, where she wound up 11th in the season-opening World Cup slalom.

“I’m processing this better result better than Levi,” she said. “After Levi I wanted to sit on the ground and scream. Now I know I can go watch the video and figure out where I can improve in GS and slalom. It didn’t surprise me that I got fifth today. It makes more sense today. I wasn’t loose enough in my legs to handle the grippy snow. One second is not hard to lose.

Hosp, the silver medalist in slalom at the 2006 Torino Winter Olympics, said she’s had “a lot of injuries and to be on the podium is so great.”

“I was fighting for it this season. I want to make it a good season. I’m so happy it works again and I hope I can do it in the other disciplines,” Hosp said.

Zettel, who also placed second in the giant slalom Saturday, commented on Aspen: “I love different places and Aspen is one of the most difficult races we have on World Cup. Aspen has such a big heart and I always love to come back.”