Shiffrin’s first giant slalom podium came Dec. 1 at Beaver Creel with a second place finish on the course that will be used for the 2015 FIS Alpine World Ski Championships. 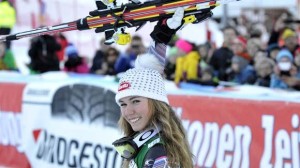 Mikaela Shiffrin was third in World Cup GS in Lienz, Austria, on Saturday.

The 18-year-old defending slalom world champion was fourth after the first run with .35 second deficit on Saturday, and charged to within .01 of second place.

“I’m normally pretty comfortable within half a second on a first run,” Shiffrin said. “It’s always better to come down and feel like you separated yourself from everybody, but I’m not quite there in GS. As long as I am in this position where I can really attack I’m psyched with that.”

Shiffrin has recorded five World Cup slalom wins in her short but productive career and has steadily been improving in GS. Saturday’s race was contested on a brutally bumpy course recently injected with water and frozen solid after being softened by new snowfall on Thursday.

“It’s probably the most injected course so far this season,” Shiffrin said. “It turned out really well, especially since it snowed. It’s a little bit bumpy, which kind of gets in your head, but if you get your skis on edge you’ll arc through it.”

Lienz is the site of Shiffrin’s first World Cup slalom podium when she finished third on Dec. 29, 2011.

“Last time I was in Lienz, I didn’t have a great GS race but I had a pretty good slalom race, so I’m really excited for tomorrow [the women race slalom on Sunday],” Shiffrin said. “I’m just thinking day-by-day and trying to put my best skiing out there. I feel like I always leave something on the hill, and I don’t want to do that anymore.”