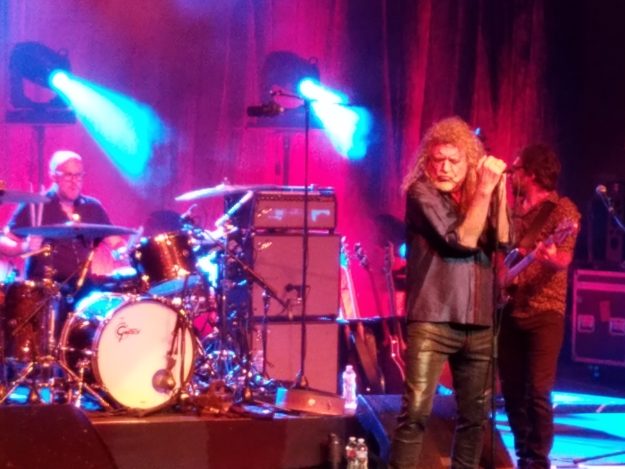 I’ve seen three of what I would consider rock’s truly legendary artists on the stage at the Gerald R. Ford Amphitheater in my 25-plus years in Vail: Carlos Santana back in the early 90s (warmed up by Phish), Bob Dylan sometime in the 2000s and Robert Plant Tuesday night.

Perennially ranked among the greatest rock vocalists of all time, Plant seems perfectly comfortable now with the limitations of his once other-worldly vocal capabilities, blending his voice with a band that can easily swing from rockabilly to mystical far-eastern rhythms to bouncing bluegrass to straight-up blistering blues. And then, of course, there was plenty of Zep.

Plant opened with Zeppelin’s pounding “When The Levee Breaks” and ended with a medley that included the classic rocker “Whole Lotta Love”. In between, there was everything from “The Lemon Song” to “Gong to California”, which Plant obligingly replaced at one point with “Going to Colorado” – fitting on a day that Gov. John Hickenlooper signed an executive order committing the state to California’s much stricter vehicle emissions standards.

Was it Carlos jamming on the Ford stage with Trey all those years ago? Maybe not in terms of the sheer musical virtuosity. But the weight of Plant’s status as one of the top five rock and roll front men of all time made this concert so much more powerful in so many ways.

Rather than a dutiful trek to the Vail Valley Foundation’s commendable effort to bring big-name acts to Vail’s stellar outdoor amphitheater stage – or an obligatory trudge to see a rock legend in his twilight years – this turned out to be an amazing musical journey in which the familiar strains of some of the greatest rock songs of all time served as a mere framework for a captivating show.

And unlike counter-culture godfather Dylan ironically laboring beneath the name of the president who pardoned Richard Nixon, there was real joy to be had at the Gerald R. Ford on Tuesday night. While the Santana-Phish show will be remembered for setting an arrest record at a Vail concert (back when weed was still illegal and you couldn’t buy it at the corner store – as Plant reportedly did on Tuesday), the Dylan show will be remembered for everyone being seated.

No amount of urging from a former town manager’s wife could get us all to stand. Tuesday during the Whistle Pig Vail concert series’ second show, very few people sat during the entirety of Plant’s hour-and-a-half-plus show – and that reportedly included Vail resident and noted philanthropist Susan Frampton. Indeed, all of Vail seemed to come out on this gorgeous night.

There was some speculation that another famous Vail resident, Metallica lead singer James Hetfield, might step onto stage with Plant after the two were spotted having lunch together in Vail earlier on Tuesday, but that didn’t happen. And it didn’t need to happen. Plant was more than capable of carrying the 2,000-plus crowd on the wings of his rich, historical repertoire.

I admit to buying tickets out of a sense of duty – the need to see the best musicians of the last two generations before they die – much as my wife and I attended Tom Petty at Wrigley Field in Chicago last summer. But just a Petty put on an energetic, comprehensive retrospective that inspired far beyond bucket-list expectations, Plant too delivered something so much more than a mere museum piece.

It’s awesome how the whole world eventually comes to you if you live in Vail, and I’ve now seen Who front man Roger Daltrey here (Blue Sky Basin opening concert at Dobson Ice Arena), Sheryl Crow at the old Garton’s Bar in Crossroads before anyone knew who she was, John Legend at Beaver Creek’s Vilar Center, and Elvis Costello just last summer on the slopes of Beaver Creek. All truly great performers in intimate, magical settings.

But the stuff of legends comes more intermittently, and the iconic artists of our age take the stage at the Ford Amphitheater – perhaps more frequently now thanks to the VVF’s Whistle Pig Vail.