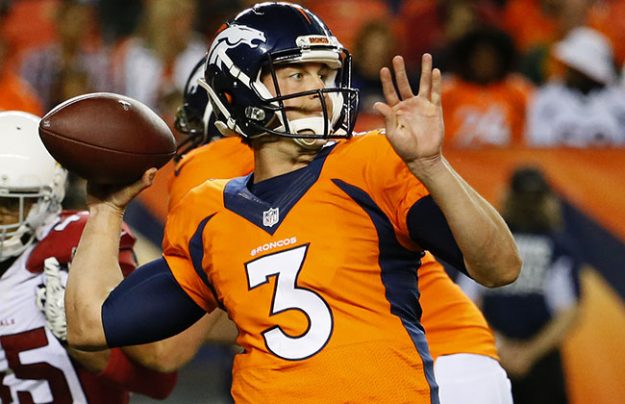 Vail will be mostly dry and sunny this week – a good opportunity to stop skiing (don’t worry, the powder will be back this weekend and next week) and clean up some odds and ends in my sports-reporting notebook. Also, it’s a good week to reflect on leadership qualities in general.

Steady, decisive, focused and confident leadership is key, whether in a team sport like professional football or a team/individual sport like ski racing. Or, for that matter, in the White House (but that’s a different blog for later in the week).

And based on the four teams still standing in the playoffs (that’s right, Freud, you were right, the Broncos didn’t make it … although clearly would have put up a better fight than the Dolphins), an “elite” QB is generally a good thing to have for a Super Bowl run – even a creaky and only marginally effective one like Manning last season.

The quarterbacks remaining? Tom Brady (four rings), Ben Roethlisberger (two), Aaron Rodgers (one) and Matt Ryan (the best remaining QB without a ring). All elite, all leaders, and all poised to cement their legacies. Personally, I’m pulling for either Big Ben to pull off the upset at New England this weekend, or for Ryan or Rodgers to beat Brady in the Super Bowl.

That’s because as a diehard Denver fan, I am sworn to despise all things Patriot, especially their golden boy ball deflator and his rule-bending Spy-gate head coach.

But back to the Broncos. I like their head-coaching change and the team of assistants Vance Joseph has assembled. It was clear this season that retired Super Bowl 50-winning head coach Gary Kubiak was not going to innovate his way out of a suspect offensive line and running attack that plummeted off a cliff when C.J. Anderson was injured.

Joseph’s offensive-coaching tandem of Mike McCoy and Bill Musgrave will be a lot more effective on that front. McCoy, for God’s sake (literally), coached a playoff win out of Tim Tebow. So getting Siemian or rookie Paxton Lynch up to speed should be far less challenging.

But are either of those guys leaders who can take the Broncos back to the promised land? That remains to be seen.

There’s been a lot of chatter about Denver front-office guru John Elway trying to replicate his massive gamble on Manning (parlaying a supposedly washed-up legend into another Super Bowl ring) by trading for Dallas Cowboys backup Tony Romo.

But while Manning was coming off neck surgery after a generally very healthy career already loaded with playoff success and a Super Bowl ring, Romo has been a bust in the playoffs and injured most of the last four seasons. I wouldn’t give up anything of value for him.

A better bet would be to see if Los Angeles Chargers QB Philip Rivers is disgruntled enough about the move that he wants to play the Manning card and jump to Denver for one last shot at a title.

While Chargers’ owner Dean Spanos was dumb enough to move his team to Los Angeles, surely he isn’t dumb enough to trade his only real asset on offense to a division rival. Besides, Rivers just signed a new contract in 2015.

I think the best plan of action for the Broncos is to go with Siemian and Lynch this season, using its $40 million in cap space to upgrade on both lines, get a third wide receiver and maybe a little bit of running back help. That should be good enough for another two or three wins and an AFC West title.

The jury is still out on whether there will be enough solid leaders on the new coaching staff and in the huddle to translate that to another Super Bowl win while the team still has an elite defense.

In ski racing, while it’s an individual sport, athletes compete as a team, especially during the “Super Bowl” every four years called the Olympics. But star athletes can lift up youngsters the way Manning did with the Broncos the past four seasons.

Just as Siemian clearly learned from Manning, it’s great to see a young racer like Jackie Wiles helped in some small way onto a World Cup podium by the sponsorship of the Lindsey Vonn Foundation. Vonn came back from injury over the weekend to finish 13th in a downhill but made sure to first praise Wiles for taking third.

The U.S. Ski Team is in an interesting phase right now, just a little over a year away from the Olympics in South Korea, as it’s stalwart stars for the last 10 or 15 years are fading off into the sunset. Other than Mikaela Shiffrin, the next generation hasn’t necessarily stepped forward to take the leadership baton.

And Shiffrin is doing it more by example. The Eagle-Vail resident welcomed the return of Vonn over the weekend, admitting it takes the spotlight off her continued to rise to the upper echelons of the sport. Vail’s Vonn, meanwhile, is the type of leader who clearly never shies away from the spotlight and embraces her role as an ambassador for the sport as a whole.

Her desire to race against men at Lake Louise is as much about drawing a mainstream audience to a fringe sport as it is about promoting Vonn’s brand. It would be good to see Shiffrin take on that role more as she continues to dominate her disciplines in racing.

But right now Shiffrin is all about her craft, and that means that one day she may surpass Vonn’s career victory record currently standing at 76 wins, but will she be as memorable to a mainstream audience?

Likewise, on the men’s side, Ted Ligety — who on Tuesday announced he’ll undergo season-ending back surgery — may have had the better career as the only American man to win two Olympic gold medals, but far more people will remember Bode Miller’s flamboyance (and U.S. record six Olympic medals).

While Vonn was more positive in her approach, Miller has been equally visible in the public eye, taking controversial positions, advocating for the sport and generally making a mark that extends far beyond the confines of ski racing. It would be huge for the sport if both Ligety and Miller can come back for the 2018 Winter Games.

And the International Ski Federation, never known for its innovation, should embrace Vonn’s bid to race against men next season. Leadership isn’t just about running a successful organization, it’s also about looking to the future and trying to envision success over the next 50 years.

For ski racing, a fringe sport in North America on the margins of public perception outside of ski towns, anything that can be done to draw in and maintain new viewers should be embraced.