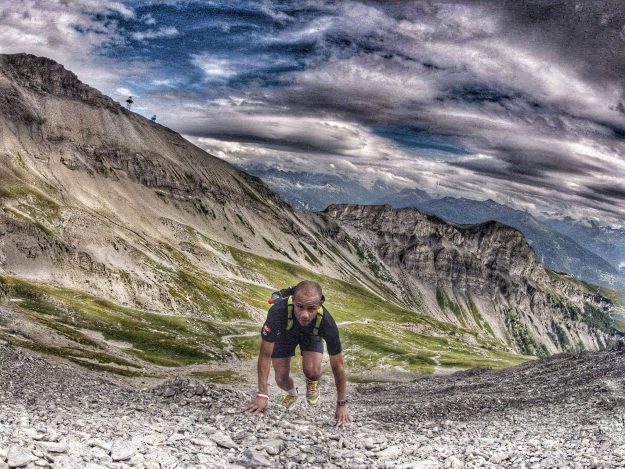 Like most pro runners, Joseph Gray consumes his fair share of electrolyte snacks, but he’s one of few that views cheese as a staple. Ice cream is right up there, too. At the GoPro Mountain Games this June 9-12, Gray will be aiming for a different kind of snack: a three-peat victory in the Superfeet 10K-ish trail run, along with the $1,200 in prize money that comes with it.

He began running as a pre-teen growing up near Tacoma, Wash. The self-described “troublemaker” found a new direction after joining his middle school track team.

Winning nearly every race he entered, it was finally getting beaten, he said, that “spanked my butt” into making running his life’s work.

“It’s about getting lost and being in the middle of nature, just you, yourself, your thoughts and your abilities,” he said.

Gray doesn’t discriminate when it comes to surface or distance. He holds the record for the Washington State 50-kilometer road race, also the mile-long, 2,000-foot-verticle Manitou Incline and has two back-to-back victories in the Go Pro Mountain Games 10K on Vail Mountain and will be going for a third this June.

“One of the most challenging aspects of all of this is being competitive at the international level in multiple distinctions,” Gray says. “It’s one thing to be a great mountain runner or a great road runner, but to cover all forms of running, it’s really tough.”

You could say that Gray’s habits stray from the meticulous regiment of many pro runners. He doesn’t eat vegetables every day but does eat “lots of cheese, lots of ice cream.”

“If I want something, I eat it. I don’t restrict myself from things all the time,” he says.

The 32-year-old’s training varies as much as his diet but he prefers to keep details to himself. He does advise training in an environment that parallels that of a competition.

“If you know the course profile somewhat, you make sure your body can run comfortably in that distance and grade, so you’re not shocked on race day,” he says.

But like getting lost in the woods, Gray believes there is a natural programming that kicks in when he runs, whether training or racing, and it’s this innate connection that confirms that he is, quite literally, on the right track.

“That’s what I love about mountain running. It’s so free. Running on natural terrain feels like this is what man was meant to do.”