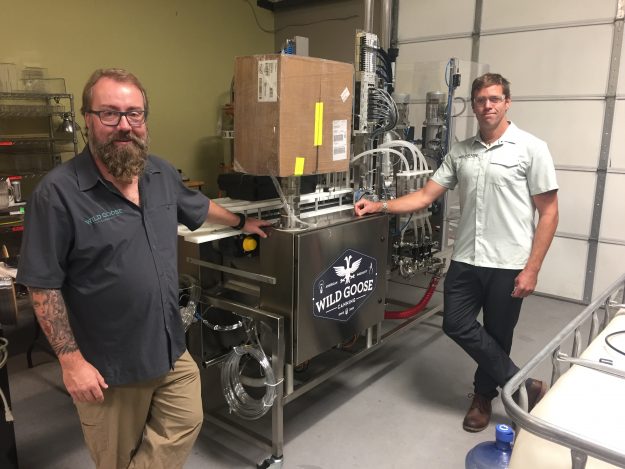 Friday marked National Manufacturing Day, a celebration of modern manufacturing meant to inspire the next generation of American manufacturers, and Wild Goose Canning in Boulder honored the day by opening its doors to members of the media and statewide elected officials last week – including U.S. Rep. Jared Polis, D-Boulder.

Polis represents the Vail Valley in Congress, along with Summit County and a large swath of the northern Front Range, where manufacturing is on the rise. Some economic officials hope to duplicate that success on a smaller scale on the state’s Western Slope, particularly with outdoor recreation industry products.

National Manufacturing Day is a time for manufacturing companies across the country to open their doors and show — in a coordinated effort — what modern American manufacturing is all about. Wild Goose Canning in Boulder, where Polis visited, is a small manufacturing shop with a big future, as the company has grown from three employees just six and a half years ago to a current staff of 48.

Colorado’s booming craft brewing sector is a $1.7 billion industry, but as Steve Kurowski of the Colorado Brewers Guild points out, that doesn’t include the contributions of companies like Wild Goose Canning.

According to a 2016 study of the economic impact of brewing in Colorado, the state remains at the forefront of the craft brewing industry, ranking at or near the top for the number of breweries, per capita production, economic impacts and favorable excise taxes.

The Colorado Liquor Enforcement Division identified 350 manufacturing brewery and brewpub licenses as of May of 2016 — a tripling of growth in the number of breweries in less than a decade.

Colorado ranks third in the number of breweries, behind only California and Washington, according to data from the Brewers Association, and third in breweries per capita. In terms of state excise taxes on production, Colorado is tied for the fourth-lowest rate nationally.

“Craft breweries, and especially brewpubs, are inherently labor intensive, making the economic impacts fundamentally local,” according to the report. “Many brewers offer employee benefits, ranging from the traditional to the creative benefits that speak to the culture of the state and industry (beer, ski passes, etc).

“Additionally, brewers continue to be growing and thriving contributors to the economy and to their respective communities through donations, volunteerism, and special events.”

In addition to visiting Wild Goose Canning in Boulder, Polis also planned to visit manufacturing technology and support companies Micron and TrueBlue in Longmont. According to a press release from Polis’s office, all three companies are great examples of the kind of entrepreneurship that needs to be supported in Congress.

“Manufacturing Day fits within the goals of the Make it In America plan, which the Democrats in the House of Representatives rolled out in June,” according to the Polis release. “The Make it in America plan has four action areas: (1) expand entrepreneurship and innovation, (2) close skills gap, (3) build a 21st century infrastructure, and (4) break down barriers to manufacturing in the U.S.”

Polis founded several startup and tech companies prior to serving in Congress, including ProFlowers.com and Techstars. He serves on the House Committee on Education and the Workforce, and through the Congressional Caucus on Innovation and Entrepreneurship, Polis launched Startup Day Across America — a national day to foster entrepreneurship.

Tipton, who for many years ran Mesa Verde Pottery in Cortez before selling it to the Ute Mountain Ute tribe, was recently recognized with the NAM Award for Manufacturing Legislative Excellence by the National Association of Manufacturers for his commitment to advancing policies that support U.S. manufacturing and job growth across the country.

“One of the most direct ways we can jump-start our economy is by supporting American manufacturers,” said Tipton, who represents the western part of Eagle County. “I am honored to be recognized by NAM, and I look forward to continuing to work to expand opportunities for good paying jobs and economic growth across the Third District of Colorado and the entire country.”

Manufacturing advocates are calling for more legislative leadership this election cycle in order to expand the sector.

“We need an economic development strategy that includes making things in this country,” said Scott Paul, president of the Alliance for American Manufacturing. “Having that kind of philosophy is quite important as we move ahead and not view [manufacturing] as just part of our past. We’ll never go back to where we were, but it also needs to be part of our future.”

Paul says Colorado is poised to lead the nation in small-scale manufacturing in the food and beverage sectors, outdoor recreation gear and clothing and many other areas associated with the state’s high quality of life.