The congressman who represents the eastern Vail Valley in Washington, Boulder Democrat Jared Polis, will take on Colorado Treasurer Walker Stapleton for governor in the Nov. 6 general election after a bruising primary on Tuesday. 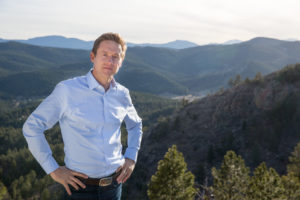 “We are proud of closing this race in an incredibly strong fashion thanks to our team’s historic efforts in reaching out to hundreds of thousands of voters across Colorado. It’s clear that Mike’s message connected profoundly with people in every corner of the state, from the Front Range, to the Western Slope, to the Eastern Plains,” Honover said.

“Mike shared his heartfelt congratulations to Jared on a fantastic race in a call earlier this evening. Mike also expressed his clear support for Polis as the Democratic nominee on the stage tonight at his election night party, saying Jared was ‘an entrepreneur for good’ who has ‘earned [his] respect and support.’ Mike went on to say, ‘I will urge all of you to join me in being the first to sign up to knock doors and make phone calls and make sure he wins this race in November so that we can complete our shared mission to, yes, offer full day kindergarten for every child, to yes get to 100% renewable energy and to make sure we build the skills that people need for the jobs that are coming.'”

In other primary news, former Routt County commissioner and state Rep. Diane Mitsch Bush won the Democratic nomination to challenge incumbent Republican U.S. Rep. Scott Tipton in the sprawling 3rd Congressional District, which includes the western two-thirds of Eagle County and most of the Western Slope.

“EMILY’s List is excited to congratulate Diane Mitsch Bush on tonight’s victory,” the group stated Tuesday. “Throughout her career, Diane has been an unwavering champion for Colorado’s working families. Diane now faces Congressman Scott Tipton, a Republican incumbent who is sorely out of touch with his constituents. We are proud to stand with Diane and we look forward to helping her flip this seat in November.”

A Tipton campaign spokesman did not respond to a request for comment.

Here’s RealVail.com’s primary election night story that was posted on the Vail Daily website at about 10 p.m. Tuesday:

Polis to square off against Stapleton for Colorado governor

After record amounts of campaign spending and months of the airwaves being flooded by ads – some of them a bit nasty – all the drama was over rather quickly Tuesday in the Colorado primary election to replace term-limited Democratic Gov. John Hickenlooper.

Republican Colorado Treasurer Walker Stapleton rather handily defeated three other contenders for the GOP nomination to run for governor in the Nov. 6 general election, where he’ll square off against U.S. Rep. Jared Polis, who also breezed to victory over three Democratic challengers.

“Elections are about choices; they are about the direction we want to see Colorado head in the future,” Stapleton said in his victory speech. “Tonight, we celebrate the first step, and we will offer Coloradans a hopeful vision of economic opportunity for all of our children. Colorado can do better, and we must! My fellow Coloradans, the stakes could not be higher for my children and for yours. I am honored tonight that you have chosen me to carry our message forward.”

Republicans have not held the governor’s mansion for more than a decade, dating back to Gov. Bill Owens in 2007.

“This campaign is about bold ideas that put Colorado families first, from protecting our access to health care to ensuring universal pre-K in every community,” Polis said. “I’m running for governor to protect our Colorado way of life from the special interests who try to stack the deck in their favor. We’re going to fight to ensure that every Coloradan can live, work, and raise a family in this state we are so lucky to call home.”

This was the first Colorado primary election in which unaffiliated voters could declare a party preference and cast a vote. According to the Secretary of State’s Office, 1,043,685 Coloradans returned ballots (411,578 Democrats, 380,974 Republicans and 251,133 unaffiliated).

Kennedy, a former state treasurer whom Stapleton defeated in the 2010 Tea Party wave, offered a conciliatory statement to Polis after a primary that at times turned negative over education issues.

“Congratulations to Jared Polis,” Kennedy said. “Together we will work toward keeping the governor’s office blue, growing the majority in the State House and winning back the State Senate.”

Polis — one of the few openly gay members of Congress — has two young children with his partner and could become Colorado’s first openly gay governor. But his defeat of Kennedy and Lynne assures that the state will continue its 142-year history of not having a woman governor.

Unsurprisingly, Johnston unofficially won Eagle County by a margin of 42 percent to 38 percent for Polis. At press time, Johnston – a former Denver-area state senator, Obama administration education advisor, son of a former Vail mayor, and the first Dem to jump into the race last year – had not issued a statement.

Prior to the race being called for Polis, Johnston posted this brief message on Facebook: “It has been a joy and an honor to run in this primary. Thank you to all who have carried me to this point.”

Stapleton beat out Victor Mitchell by a margin of 49 percent to 30 percent with a similar number of precincts counted, followed by Greg Lopez (12 percent) and Doug Robinson (9 percent).

Democrats nominated Boulder’s Joe Neguse to run for Polis’s 2nd Congressional District seat, and Diane Mitsch Bush appeared poised to rather easily defeat two other Democrats in her bid to challenge incumbent Republican Scott Tipton in the 3rd Congressional District, which includes the western two-thirds of Eagle County, Pueblo and the majority of the Western Slope.

Mitsch Bush used to be Eagle County’s state representative before resigning to run for Congress. She was leading Carbondale’s Karl Hanlon 64 percent to 28 percent with just under 70 percent of the precincts counted. Former Eagle County Commissioner Arn Menconi trailed with 8 percent.

Mitsch Bush unofficially won Eagle County by a margin of 71 percent to 15 percent for Hanlon and 13 percent for Menconi.