Park City, Utah’s Ted Ligety on Friday joined the 20-win club – some very rarified air for any World Cup ski racer, but especially for an American. 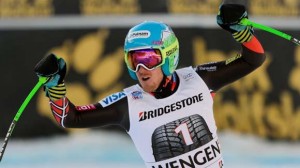 By winning a super-combined (one run of slalom, one run of downhill) on the famous Lauberhorn course in Wengen, Switzerland, Ligety recorded his 20th career win – his first in any event other than giant slalom – and became just the 19th ski racer to win 20 World Cup races.

And the 2006 Olympic combined gold medalist is only the fourth American to ever accomplish the feat, behind Lindsey Vonn (59 wins), Bode Miller (33) and Phil Mahre (27).

The race was run in a reverse format, with the slalom portion being staged before the downhill. Ligety is also the defending world champion in super combined.

“It’s nice to win a super combined finally,” Ligety said. “I’ve only done so in big events, which is a nice thing to do, but it would have been good to win a World Cup before now. To get this win is a nice confidence booster and feels really good because January has been a rough month for me. It’s nice that I can turn the corner on that one.”

Ligety, who ran bib one, was second after the slalom, 1.22 seconds behind Alexis Pinturault of France, and finished 13th in the downhill to overtake Pinturault for the win.

“I think in a way I was lucky, especially in the morning running first because I got a super smooth course and that helped me to relax and stay enough ahead of the downhill guys despite not skiing that fantastic,” Ligety added. “I feel lucky that I could nab Alexis on this one because he is one of the best competitors out there.”

Americans have won the Olympic gold medal in the combined event at the last two Winter Games, with Ligety the surprise 21-year-old victor at the 2006 Torino Olympics when Miller surrendered a huge lead after the downhill by straddling in the slalom. And then Miller won his only Olympic gold in the event at the 2010 Vancouver Olympics.

Miller finished ninth on Friday, and Jared Goldberg (Holladay, UT) was 20th, scoring his ever first World Cup points. Ligety and Miller finished 1-2 in a giant slalom earlier this season at Beaver Creek.