Vonn scheduled for EpicMix pacesetting event at Vail on Friday

Some Colorado ski resorts enjoyed as much as 3 feet of new snow in October – a trend that’s continuing so far in November. And while only four ski areas are open to the public, ski racers eager to get a jump on Olympic training are finding exceptional early-season conditions. 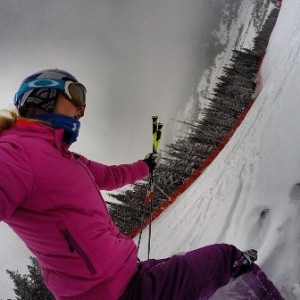 Defending women’s downhill champion Lindsey Vonn, of Vail, tweeted on Friday, “Powder day with my GoPro [camera]. Happy to be home.” Vonn, recovering from a season-ending knee injury in February, has been back on skis and training in Chile and Austria so far this fall.

Vonn is scheduled to participate in the EpicMix Racing pacesetting event at Vail’s Golden Peak on Friday, Nov. 8, although Vail is not open to the public until Friday, Nov. 22. On Friday, Nov. 1, resort officials reported 9 inches of new snow, and another round of winter blasted through on Sunday, Nov. 3. More snow is in the forecast for Monday and Tuesday.

Keystone and Copper Mountain, both of which opened to the public on Friday, Nov. 1, reported 4 inches new on Monday, Nov. 4. U.S. Ski Team officials say conditions at Copper – home to the U.S. Ski Team Speed Center – are the best they’ve ever been at this stage of the season since the facility opened in 2011.

More than a foot of new snow cancelled training on Friday, but things were back in full swing for the weekend. The center features the only full-length downhill training available anywhere in the world at this time of year, giving U.S. medal hopefuls a huge leg up in early-season training.

“This is the best coverage we’ve had at this time of year at Copper for as far back as I can remember,” said Chip White, women’s head speed coach. “We weren’t able to train [Friday], but the plan is to get the fresh snow packed down to a hard training surface in order to run super G.

Like Vonn, Alice McKennis, a one-time World Cup winner from Glenwood Springs, is coming off a knee injury and eager for training opportunities ahead of the Sochi Games in February.

“You couldn’t ask for better preparation for the World Cup and Olympic season,” McKennis said. “It’s pretty unique for us to be able to have such a long run to train on so early in the year. Normally, we’re pretty limited to how much we can send it. But this is full two-minute downhill.”

The U.S. Ski Team is coming of a record medal haul (eight) for the alpine squad at the 2010 Winter Games in Vancouver. Vonn won two medals, including the downhill, Julia Mancuso, a 2006 gold medalist, won two silvers, and Bode Miller collected a medal of every color in Canada, including his first gold in the combined event. Miller made his return from a 2012 knee injury late last month in Austria, and should be back in top form by Sochi.

Add to the medal favorites Eagle-Vail’s Mikaela Shiffrin, an 18-year-old world champion in slalom, and 2006 combined gold medalist Ted Ligety, who didn’t medal in Vancouver but won the opening giant slalom last month in Soelden and collected three golds at the world championships in Austria in February.

“Sooooo happy to be home again!” Shiffrin tweeted last week, after finishing a very respectable sixth in the Soelden GS. “And psyched to start prepping for Levi!”

Shiffrin will be favored to win the season-opening World Cup slalom in Levi, Finland, on Saturday, Nov. 16. Then the women return to the Vail Valley Nov. 29-Dec. 1 for World Cup races on the new Raptor women’s course adjacent to the men’s Birds of Prey course at Beaver Creek. Vonn has said she’ll make her season debut at Beaver Creek.

The men race the traditional Birds of Prey course Dec. 6-8.

Breckenridge and Wolf Creek, which has been open the last two weekends, open for the full season on Friday, Nov. 8. Beaver Creek is set to open Wednesday, Nov. 27.