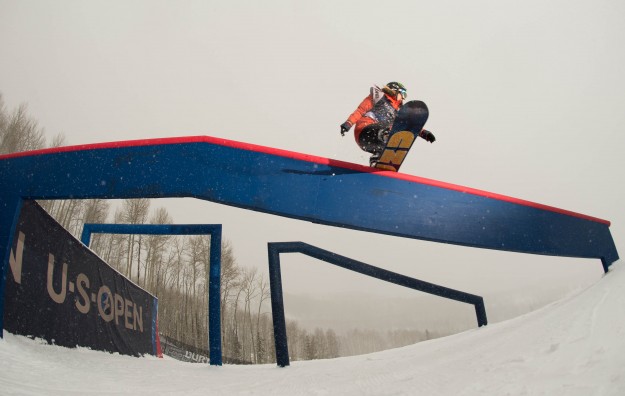 Olympic gold medalist Jamie Anderson scored her women’s record fourth slopestyle title Friday in snowy conditions on Vail Mountain, and Mark McMorris led a Canadian charge that included three of the top four men’s spots on the leader board as the  32nd annual Burton US Open Snowboarding Championships presented by MINI wrapped up its third day.

Under cloudy skies and with light snowfall, Anderson took the US Open slopestyle title back from Canada’s Spencer O’Brien, stealing the show on her second run with a gap to boardslide, 50-50 to frontside boardslide, 50-50 to backside 180 tailtap out in the rail section, and a Cab 720 nose grab, switch backside 540 indy, and a frontside 720 mute grab on the jumps, scoring an 87.55.

“I love this event,” said Anderson, of South Lake Tahoe, Calif. “I love that Burton has created a stage for us to really show what snowboarders are capable of. To have it open to all riders to get involved in is definitely huge and something that I wish more events incorporated. I love the Rockies and Vail, and being here supporting the Open is so fun.”

Anderson’s win also made her the 2014 World Snowboard Tour Slopestyle Champion, her third total. Anderson beat out Norway’s Silje Norendal, who had been leading most of the season. With Norendal not making finals in Vail, Anderson had yet another chance to defend her title. She effortlessly proved why she is the best overall slopestyle rider in the world.

“It feels amazing,” Anderson said. “We definitely were under the winter elements today, which kind of felt good. It’s snowy, the course is a little crazy, but I was so impressed with all the girls’ riding and just happy to be out here in Vail.

“This win is different than the Olympics because I didn’t have all the pressure on me, but I like to do my best all the time and being able to participate in the U.S. Open is huge for me. It mean’s so much.”

After the women, 10 men took to the Snow Park Technologies course for the three-run format, with McMorris pulling out the stops and landing on top once again. Coming into the finals in ninth position, McMorris solidified his second consecutive US Open title with a run that included a switch boardslide to frontside boardslide, 50-50 to backflip out, frontside boardslide 450 out on the top rail section, Cab 1260 mute grab, frontside double cork 1080 mute grab, backside triple cork 1440 mute grab on the jumps, scoring an 87.50.

Sochi 2014 Olympic silver medalist Stale Sandbech, of Norway, came in right behind McMorris with an 87.20, and Canada’s Maxence Parrot finished third with an 84.30. Sandbech also became the 2014 World Snowboard Tour Slopestyle Champion with his second-place US Open finish.

Both McMorris and Anderson claimed cash prizes of $45,000 apiece.

Additionally, for the second time in the award’s three-year history, LAAX beat out Vail to win this year’s MINI Feature Award. Designed by the LAAX park crew, the Burton European Open slopestyle upper rail section offered the most creative features for competitors, including various lines so that riders could choose to hit different features each run.

Saturday, don’t miss the final day of the Burton US Open with halfpipe finals beginning at 11:30 a.m. MST, and live coverage on FOX Sports 2 and Burton.com/USO. For additional airings, run replays, full webcasts, broadcast schedules and more, head to www.Burton.com/USO.

Also check your local listings to watch the US Open Lifestyle show, and Men’s and Women’s Slopestyle and Halfpipe highlight shows on FOX Sports 2. Follow all Burton US Open happenings at facebook.com/burtonsnowboards, @burtonsnowboard on Twitter and Instagram, and the hashtag #BurtonUSOpen.