Nixon resigned, Ford pardoned for ‘good of the nation’ 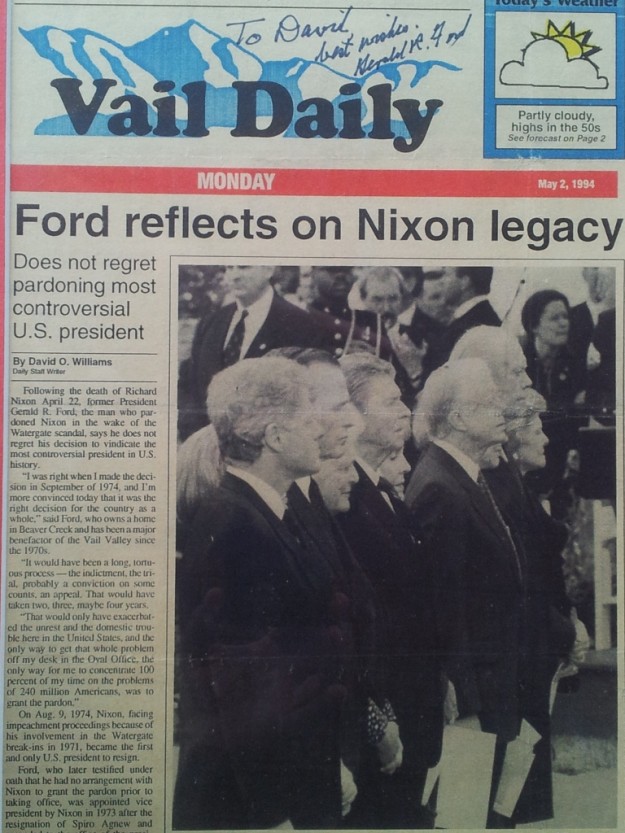 When Richard Nixon became the first and only U.S. president to resign just over 40 years ago, he claimed he was doing so for the same reason his successor Gerald Ford pardoned him a month later: the good of the nation.

Ford by then was a fixture in the Vail Valley, having started skiing here while still a longtime congressman from Michigan. Here’s what Ford had to say in a story that first ran on the front page of the Vail Daily on May 2, 1994, and was then picked by wire services around the world:

“It was right when I made the decision in September of 1974, and I’m more convinced today that it was the right decision for the country as a whole. It would have been a long tortuous process – the indictment, the trial, probably a conviction on some counts, an appeal. That would have taken two, three, maybe four years. That would only have exacerbated the unrest and the domestic trouble here in the United States, and the only way to get that whole problem off my desk in the Oval Office, the only way for me to concentrate 100 percent of my time on the problems of 240 million Americans, was to grant the pardon.”

On Aug. 8, 1974, Nixon, facing impeachment because of the Watergate break-ins in 1971, addressed the nation and offered his resignation the following day at noon.

“To continue to fight through the months ahead for my personal vindication would almost totally absorb the time and attention of both the president and the Congress in a period when our entire focus should be on the great issues of peace abroad and prosperity without inflation at home,” Nixon said that night. “Therefore, I shall resign the presidency effective at noon tomorrow. Vice President Ford will be sworn in as president at that hour in this office.”

Ford became the first and thus far only man to be appointed both vice president and president – ascending to the vice presidency in the wake of Spiro Agnew’s resignation following tax evasion and money laundering charges in 1973. Ford pardoned Nixon — swearing later under oath there was no previous deal in place – even though he knew it would likely cost him the Oval Office in 1976.

“The pardon had no impact on how I conducted my responsibilities as president. It undoubtedly was one of several major factors in my defeat in 1976,” Ford told me in 1994. “I only lost by a handful of votes, figuratively speaking, so there were people then and maybe some today who never forgave me for pardoning President Nixon, but a president has to do what he believes to be right and not what is politically expedient. And by doing what I thought was right … it was a way to handle a very tough problem so I could concentrate on the major challenges that I faced in the Oval Office at home and abroad.”

This past summer for the first time I met the man who succeeded Ford, former President Jimmy Carter, at a Carter Center confab on Vail Mountain. His presidency and foreign policy decisions in Iran, Afghanistan, Israel and Egypt have come under even more focus (and continued criticism and praise) given recent events in the Middle East. But that’s a topic for a future blog.