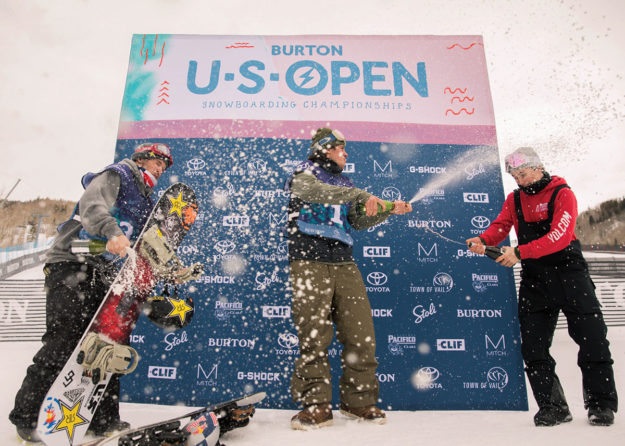 The men’s slopestyle podium in all its glory (Burton US Open photo).

Slopestyle finals came down to a nail biter on many fronts Friday at the 36th annual Burton U.S. Open Snowboarding Championships. Defending champion Mark McMorris (CAN) earned the top score on the final run of the three-run finals, while the women’s field made the difficult decision to cancel the competition due to challenging winds. Results from the women’s semi-finals stood as the final results with Jamie Anderson (USA) earning her seventh Burton U.S. Open title.

The top three qualifiers from Wednesday’s men’s semi-finals stayed at the top in Friday’s finals, with Mark McMorris confirming his place at the top of the slopestyle field in a gripping final run to earn the top score of 88.10. McMorris soundly put together his winning run, skating through the upper rail section with technical combinations, including a wild switch boardslide cork 630 Indy out, into the trio of jumps, nailing a switch backside 1260 melon, followed by a frontside triple cork 1440 mute into a backside triple cork 1440 Indy in front of the roaring crowd.

McMorris, who spent the last year coming back from a life-threatening injury said, “With everything I’ve been through, today makes it worthwhile 100-percent. This is my life and this is what makes me most happy.”

Colorado local Chris Corning (USA), improved his ranking, bumping up a spot from semi-finals into second. He earned his top score of 87.95 on the final run, linking up back-to-back 1440s and adding in a trick that he had just learned in practice—a frontside 1440 stalemasky into a backside triple cork 1440 melon. Marcus Kleveland (NOR) also put on an incredible performance sending it huge, pairing a switch frontside double cork 1620 mute into a backside 1440 mute for third place with a score of 87.20.

Due to high winds and a vote from competitors, the women’s slopestyle finals were cancelled Friday. The Burton U.S. Open has always been a rider-driven event, and as such, the safety of the riders is top priority. So, when the riders voted to cancel the women’s slopestyle event, the results fromWednesday’s semi-finals stood, making Jamie Anderson (USA) the 2018 champion based on Wednesday’s semi-final results. Defending U.S. Open champ Anna Gasser (AUT) took second and Julia Marino (USA) landed in third.

This is the seventh Burton U.S. Open title for Anderson since earning her first slopestyle title in 2007. The ladies were disappointed that the weather did not cooperate for Friday’s slopestyle finals, but thankful to have the option to cancel.

“It was cool that the Burton U.S. Open was down to let everyone have a discussion, because sometimes we don’t get to have a voice,” said Anderson. “It was nice to get to congregate today and make a call for what’s best for all of us.”

Anderson is looking forward to unveiling new technical rail tricks that she dialed in at U.S. Open practice in the future. Gasser also shared that she’s been working on incorporating her big air tricks like her Olympic gold medal winning Cab double cork 1080 into her slopestyle run. But these tricks will have to wait for future competitions.

Additionally, Clif Bar awarded the Clif ‘Raise the Bar’ Awards rewarding creativity and style by spotlighting the most innovative slopestyle trick on any feature. Up-and-coming rider Kokomo Murase (JPN) earned the women’s award for her boardslide 270 Indy out on the second rail feature. Nik Baden (USA) earned the men’s award with a stylish frontside 1080 Indy.

For details on all things U.S. Open, follow the hashtag #BurtonUSOpen and head to BurtonUSOpen.com or download the official Burton U.S. Open app on your mobile device now through Google Play and the App Store. You’ll find a full list of invited riders, nightly live music, product demos, Burton Girls happenings, Kids Learn To Ride opportunities, and the history of the longest-running snowboard event in the world.