Lumbering into the future of freelance journalism in Colorado 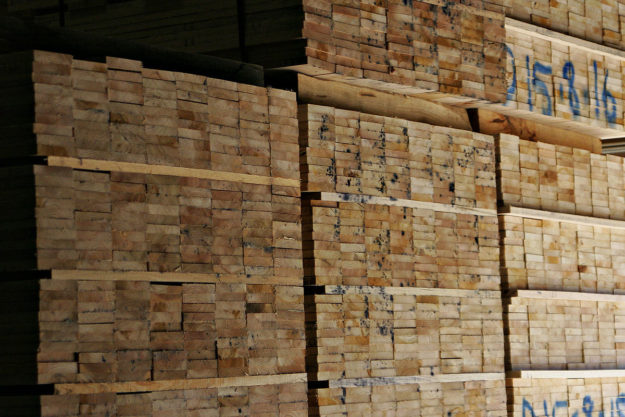 The cost of Canadian softwood lumber is up 40 percent so far in 2018 (Wiki Commons photo).

I’ve previously outlined my reasons for not subscribing to the Denver Post – one of which involves its vulture capitalist owner Alden Global continuing to slash staff while erecting a prohibitively expensive paywall – but my main gripe is with the paper’s steadfast refusal to support freelance journalists across the state. Seems like they’ve found a nice way around that.

Instead of paying me whatever pittance they used to dole out back in the day when I was a regular contributor to the Post from Eagle County, the “Voice of the Rocky Mountain Empire” just strikes reciprocal deals with newspaper chains that are still doling out alms to the poor in places they no longer send staff writers. Case in point, my story on denverpost.com on Sunday:

The story first ran in the Vail Daily, where I used to be a staffer many years ago and a paper I did battle with as a competitor in the late 90s and early 2000s. It’s a newspaper I’ve circled back with in recent years because in these darkest of dark times for print journalism, the Daily and its parent company Swift has found a way to survive and still “support” freelancers. For that, they are to be commended.

Now comes the Colorado Sun and its band of merry, rouge former Post reporters and editors looking to remake the way news is financed and distributed in Colorado. One of their pledges is statewide coverage using freelancers and their own reporters. We’ll see if that commitment holds true, but right out of the gate it puts them several steps ahead of Alden Global Capital.

Here’s a repost of that localized trade-war impact story from Sunday’s Vail Daily:

At first blush, President Donald Trump’s escalating trade war with major Colorado trading partners such as Canada, China, the European Union and Mexico would not appear to have too much impact on a resort area such as Eagle County, with very little agriculture or manufacturing.

But expert observers say the interconnected nature of the global economy means Eagle County is already seeing a spike in the cost of goods ranging from lumber, steel and aluminum in construction to tech products to food in local grocery stores and restaurants.

“Tariffs imposed by the United States are nothing more than a tax increase on American consumers and businesses — including manufacturers, farmers, and technology companies — who will all pay more for commonly used products and materials,” the U.S. Chamber of Commerce stated last month, pointing out $277 million in Colorado exports are “threatened by a trade war.”

Chris Romer, president and CEO of the local Vail Valley Partnership chamber, echoed the sentiments of the national chamber.

“Working together with other nations on fair trade rather than retaliatory tariffs would likely create better outcomes for the price of things you and I and our visitors buy,” he added.

Trump has already imposed a 25 percent tariff on $34 billion in Chinese goods, which prompted retaliation on an equal amount of American goods by China. In an effort to reduce the $375 billion trade deficit with China, the U.S. is now considering tariffs on an additional $200 billion in Chinese imports, which would no doubt trigger additional Chinese retaliation.

Ultimately, the stock market may take a hit – although it’s remained steady to date – and reduced revenues for American companies and high net-worth earners would impact both the real estate and tourism industries in Colorado’s high country, experts warn.

Construction of high-end homes in Eagle and Summit counties has already been impacted by an escalating Canadian trade war, with the U.S. imposing new tariffs on Canadian lumber, steel and aluminum. The cost of Canadian softwood lumber is up 80 percent since last year – 40 percent of that coming in 2018 – as the U.S. tries to offset Canada’s subsidies for its lumber industry.

“It’s been as much as 40 percent – maybe a little bit more,” Edwards Building Center manager Chris Boyd said of spiking lumber prices since last spring. “[Tariffs] hit metal somewhat too, but it’s not serious, like for rebar and that kind of thing.”

But Boyd says the lumber wars with Canada have been going on for years.

“You can’t blame Trump on this one,” Boyd said. “It was something that was started under the Obama administration, and they finally came to an end, but it didn’t take effect until this past spring.”

In fact, ongoing U.S. efforts to curtail the impacts of the deeply subsidized Canadian lumber industry on U.S. forestry products predates President Obama and can be traced back to the Reagan administration in the 1980s. Nevertheless, homebuilders are feeling the pinch even more in recent months and are passing on those price increases to homebuyers.

Colorado beef and pork prices have been impacted as heated trade-war rhetoric with Mexico over renegotiation of the North American Free Trade Agreement (NAFTA) continues and China also targets U.S. imports. Colorado corn, a primary feed source for Colorado livestock, has seen a price drop of 20 percent since June 1.

“We’re such a global economy and we really are impacted and affected by everything else that happens in the world,” said Kim Reddin of the Colorado Corn trade association in Greeley. “We’re very interconnected, and trade is very much a part of that picture.

“Even in the example of corn, we may not directly export corn to China, but we feed a lot of livestock in the state of Colorado and some of that livestock – the meat products that we have in Colorado – do get exported, so in a sense our grain is getting exported through livestock.”

The Trump administration last month announced a $12 billion emergency agriculture relief package, but corn growers were lukewarm to that approach.

“NCGA’s grower members are confronting their fifth consecutive year of declining farm incomes while facing high levels of uncertainty due to ongoing trade disputes and disruptions in the ethanol markets,” National Corn Growers Association President Kevin Skunes said, referring to corn-based ethanol in gasoline. “Corn farmers prefer to rely on markets, not an aid package, for their livelihoods.”

“This solution is as insane as the policy that got us into this mess,” Bennet said of the farm subsidies and Trump’s tariffs. “Our farmers and ranchers want to compete and grow in the global economy. The president’s incoherent trade policy continues to lead to missed opportunities. President Trump cannot fix this self-inflicted crisis with a $12 billion slush fund.”

The jury is still out on the local impacts of the trade wars on food prices. Colorado’s burgeoning distillery business is feeling the pinch from an escalating trade war with the European Union, which Trump called “a foe” and has targeted U.S. alcohol imports for retaliatory tariffs.

Ryan Thompson, founder of the local 10th Mountain Whiskey & Spirit Co., says they were approached in the last year about possibly going into European markets but didn’t pursue it. Now he’s glad they didn’t, and Canada was already a non-starter due to onerous taxes and tariffs.

“We’ve had some opportunity to go into the Canadian market but we’re ignoring it because of that reason,” Thompson said. “We have our hands full here just trying to grow nationally, so [the trade war] doesn’t really affect us too much. It would be helpful [for it to end], but it’s just kind of the nature of the beast.”

Thompson says brewers have been more impacted because of aluminum price increases.

“But what’s affecting us more is trucking prices,” Thompson said, pointing to a severe labor shortage in the trucking industry. They’ve almost doubled on us — getting glassware into the distillery. We’ve been more affected by that, but that doesn’t have anything to do with the tariffs or anything.”