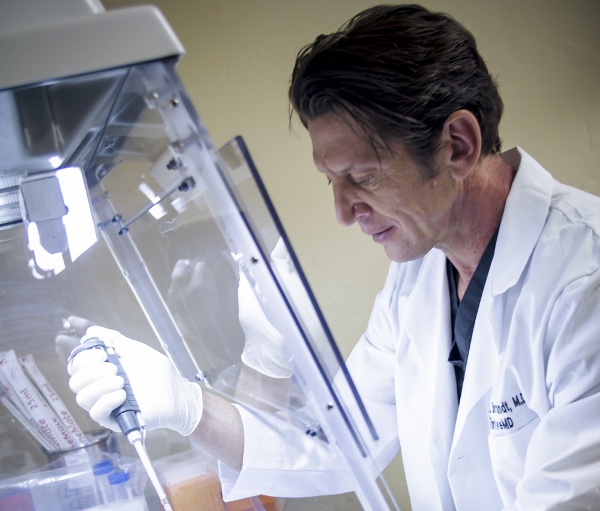 The Kentucky Derby showcases some of the most fit thoroughbreds in racing. Up until just a few years ago, however, the average race horse career was well under three years. The high demands of physical activity would cause damage to joints over time and increase the risk of injury. Over the past decade, however, advances in the use of stem cells to help regenerate joints and restore soft tissue injuries has not only lengthened the athletic career of horses but of people as well.

Back to the future of medicine

A few years ago, saying the words “stem cells” conjured some controversial feelings, but regenerative medicine has already solved what was once an unconscionable problem for some. New procedures have now been developed to harvest, separate and concentrate adult human stem cells from the very patients who require care. This development in regenerative medicine pertains to the future of joint care and maintenance, as well as a variety of other systemic diseases. Dr. Scott Brandt, of ThriveMD, is one of the doctors pioneering the application of this procedure in hopes of helping patients.

“The first procedures were done on horses and dogs,” Brandt said. “This new procedure that we are performing has been done for a couple of years now with (human) patients, and we are seeing incredible results. I’m staying up on the literature, and I’m very excited to see where these new developments in medicine are going.

Recent studies done at a number of universities have revealed that the introduction of stem cells into damaged human joints can significantly strengthen and regrow joint soft tissues.

Brandt cites a high success rate among adults: Nearly 80 percent of patients receiving treatment cite improvement of function and decreased joint pain within three to six months. When asked about the other 20 percent, Brandt said, “It’s important for people to understand that this isn’t a procedure for everyone. My staff and I go to great lengths to provide consultation and careful advice before we allow a patient to pay for the procedure. There are, obviously, some injuries that require surgical repair, but just because something has been repaired surgically doesn’t mean that it is healed. We can provide supplemental care to individuals suffering from a variety of joint and soft tissue injuries, even in the presence of a previous surgical repair, and we see amazing outcomes.”

Detractors of the use of human stem cells have cited concerns over the use of human growth factors and the potential for uncontrolled cell growth, but this largely appears to be due to a misunderstanding of the procedure.

“All of the factors introduced into the body during the procedure are not only all human but (are) all naturally occurring,” Brandt said. “Concerns over a one-time injection of these factors shouldn’t really exist, but we educate people and ensure they understand the facts.”

The basic procedure involves pulling about a cup of adipose tissue (your beer belly) and processing it down in a sterile environment to its most basic elements. In addition, a small sample of bone marrow from the iliac crest (the bony part of your hip) is concentrated as well. These two basic elements, combined with blood plasma from the patient’s body, are then re-injected in a very small dose to the problem joint under X-ray guidance. The procedure lasts about three hours, but it is nearly painless and much less invasive than a surgical repair of a joint.

The cost of a single joint is typically cheaper than surgical repairs, with subsequent joints treated the same day at even lower rates. The price tag at ThriveMD, though significant for some and outside of traditional insured procedures, is still significantly lower in cost than many in-patient surgical procedures.

“Just in the past year two studies have been done on the use of mesenchymal cells (stem cells) in disc repair,” Brandt said. “In a study of 100 patients that were candidates for disc fusion, only two went on to fusion after treatment. As a result of those studies and other evidence, we are beginning the procedure here in our office to treat that issue as well.”

Beyond the treatment of spinal discs, developments in regenerative medicine around systemic diseases like Type 2 diabetes, multiple sclerosis and chronic Obstructive pulmonary disease, also show promise. In recent studies involving the use of stem cells in patients with Type 2 diabetes, preliminary results appear to indicate a reduction in insulin requirement by nearly 50 percent in a single treatment. The long term results of treatment for systemic diseases are still being studied.

“Imagine the improved quality of life that we could provide to people with these issues,” Brandt said. “It’s a very exciting time in the field, and I’m looking forward to the care we will be able to provide. The only problem now is that the data is so fresh we haven’t had time to tell anybody yet.”