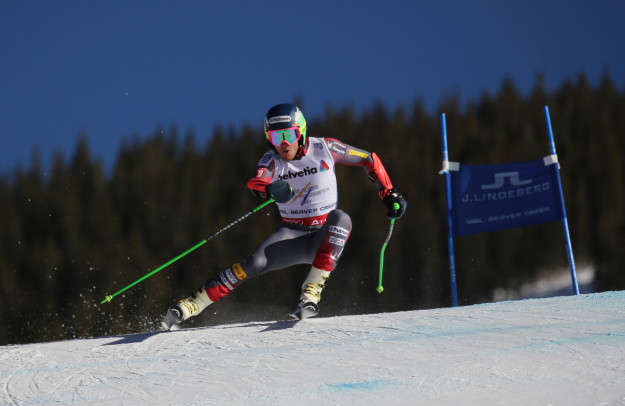 BEAVER CREEK, Colo. — Park City’s Ted Ligety defended his gold medal at the World Championships Friday with a dominating second run of giant slalom that erased at .24-second first-run deficit to his rival Marcel Hirscher and relegated the Austrian to the silver medal.

Hirscher, already a gold-medal winner in the alpine combined at these Worlds, finished with silver — .45 seconds back — and France’s Alexis Pinturault claimed bronze.

The defending Olympic and world champion in GS, Ligety has owned the discipline for years, but this season Hirscher has four World Cup GS wins to just one for the American.

“I love racing in the U.S.,” said Ligety, who’s now won six straight GS races at Beaver Creek. “It’s a real anomaly for us to race in the United States. We’re always in Europe, so just having that extra comfort level of being closer to home and having the friends and family supporting you here is huge.”

The only American ski racer to ever win two Olympic gold medals, Ligety now has won a record number of World Championships medals for an American (seven) and is the first racer of any nationality to ever win three GS world championships.

“It’s hard to rank them, but this win is a little more emotional than some of the other ones just because this year has been a little more of a struggle,” Ligety said. “In 2013, I was winning everything, so I felt like I should have it really easily.

“Same with the Olympics [in 2014]. I was skiing great before that and knew I should be able to win it. This one was a bigger question mark as far as how I was skiing and how I could handle it. To be able to come through and pull it off is awesome.”

A huge crowd turned out to cheer Ligety on at Beaver Creek, packing the grandstand and lining the course under intensely blue skies and 50-degree temperatures.

Friday’s medal was Ligety’s second of these championships after his bronze in the alpine combined earlier in the week. The U.S. now has won four medals at these Worlds, including a bronze in super-G for Lindsey Vonn and a silver in downhill for Travis Ganong.

Eagle-Vail’s Mikaela Shiffrin hopes to add to the tally in her signature slalom event on Saturday. The first run is at 10:15 a.m., and the second run is set for 2:15 p.m. All the races are free and open to the public. Go to the official website for more information.