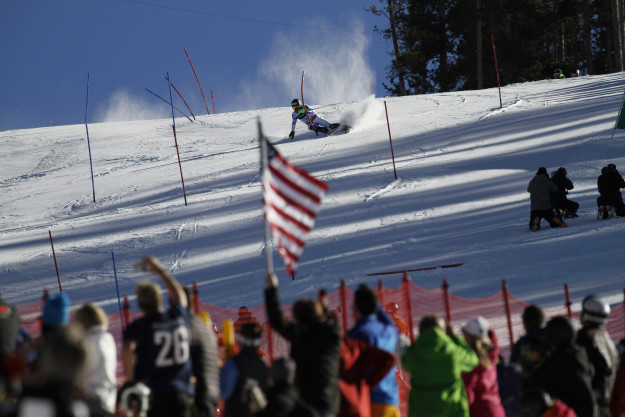 BEAVER CREEK, Colo. — Park City’s Ted Ligety overcame a 3.03-second deficit after the first run of downhill with a sizzling second run of slalom that landed him a miraculous bronze medal in the Alpine Combined event at the World Championships here Sunday.

Gold medalist Marcel Hirscher of Austria got a very lucky break when the Czech Republic’s Ondrej Bank was disqualified when he skied through the last gate off the Red Tail jump in the first run downhill, lost a ski and crashed through the finish line. That bumped Hirscher from 31st after the downhill into 30th, allowing him to start first in the second run of slalom.

That proved critical as Hirscher turned in the top slalom time, claimed the overall lead and the course continued to deteriorate under intensely sunny skies. Ligety came down second in the slalom and finished just behind Hirscher due to one bad, back-seat bobble on a gate.

The final skier of the day — the top downhiller Kjetil Jansrud of Norway — did just well enough in the slalom to bump Ligety to bronze and claim the silver.

Bank was taken to the Vail Valley Medical Center where he was diagnosed with a concussion and a leg contusion. He is expected to fully recover, although his crash stunned the capacity crowd in the morning run of downhill.

“This is definitely a surprise,” Ligety said. “After the downhill run I thought there was no possibility of getting anywhere close to a medal. It was just dumb luck, and good strategy to be running one and two just because it’s so hot and such soft snow. It was more lucky than anything else.”

The only American to ever win two Olympic alpine gold medals, Ligety was glad to get any color World Championships medal after his downhill run.

“Whenever you win a medal, it’s an awesome day,” he said. “It’s not the way I would have liked to have my race go, as far as having a good downhill run. I had an amazing slalom run, besides having a big mistake. For 59 out of the 60 gates I was beating Marcel [Hirscher], and that’s a huge confidence booster for me. That’s encouraging for the slalom on Sunday.”

The men’s slalom will wrap up these World Championships on Sunday, with the first run at 10:15 a.m., and the second run at 2:30 p.m. The women’s alpine combined is set for today.

“I think if I was a half a second faster in the downhill, I wouldn’t have been able to get a medal at all,” Ligety said. “That’s how big of a difference running early was. It was a brilliant strategy to be that slow, I guess! That’s the thing about ski racing. It takes a lot of luck and a lot of weird things happening.

“I skied with reckless abandon [in the slalom], not really thinking there was any chance. When I had that big mistake, I was millimeters away from calling it quits and pulling out. Luckily I didn’t, obviously.”

Ligety’s bronze was the third medal for the United States on home snow halfway through these World Championships. Eagle-Vail’s Mikaela Shiffrin has a shot at medal in Thursday’s GS, and Ligety will be among the favorites Friday in the men’s GS. Then Shiffrin will be favored in the slalom on Saturday.

Vail’s Lindsey Vonn, the bronze medalist in last week’s super-G, will compete today in the women’s alpine combined. All the races are free and open to the public. For start times go to the officials website.