Ligety, Miller head into Val d’Isere with an eye on Sochi

No American man has ever won an Olympic gold medal in giant slalom, and only one – Bode Miller – has ever won a GS medal of any color (silver at Salt Lake City in 2002).

So Park City’s Ted Ligety is poised to make history early next year in Sochi, Russia, and the way he’s skiing he may make it by a wide margin. The thing is, Miller might be right there with him on the podium after the way the 36-year-old performed at Beaver Creek last weekend. 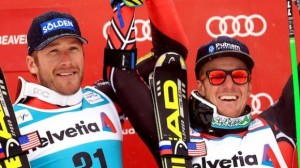 Bode Miller, left, and Ted Ligety on the podium together at Beaver Creek on Sunday (USSA file photo).

Ligety, 29, tied the legendary Alberto Tomba with his fourth straight World Cup GS win, but Miller – coming off a 2012 knee injury that cost him all of last season – was a shocking second behind his younger teammate. Both men will try to keep rolling in a GS at Val d’Isere, France, this weekend.

“Sharing the podium with Bode is awesome,” Ligety said Sunday after his third straight win at Beaver Creek and the 19th World Cup victory of his career. “I’m a little bit surprised, actually. He probably doesn’t like it when I say that, but it’s impressive how he was able to bring his intensity up and put down some impressive runs. That’s cool to be able to have another American guy challenging me up there.”

Miller, who recorded the last of his American record 33 career wins in a downhill at Beaver Creek in 2011, has not won a GS since 2005 at Beaver Creek. He has nine GS wins in his career, more than any other discipline, and appears to be back in form after finishing 19th in the opening GS in Soelden, Austria, in October. That race was won decisively by Ligety.

“I’m ready to ski as hard as I can now, and I think to be able to beat somebody like Ted, that’s what you have to do,” Miller said. “You have to be able to go absolutely 100 percent top to bottom with no mistakes and no fatigue.

“I knew after the first run that it was probably unlikely to beat Ted. He’s just a really clutch performer in those kind of situations. I wanted to make sure that when I got to the finish line I at least let him know that I was coming for him and that there’s no coasting.”

Ligety still won by more than a second and appears to be the prohibitive favorite in the discipline in Sochi, but Miller is at least showing he may be able to climb back on the podium in the event and add to his American record five Olympic medals.

No less an expert than Vail’s Lindsey Vonn, who is attempting a comeback from a knee injury of her own, said she was surprised by Miller’s return to form in October.

“I was impressed with Bode [in Soelden]. I saw him training and I trained with him and I definitely thought he was going to qualify [for a second run] but I think his first run definitely surprised me,” Vonn said last month. “I think he was top 10 his first run, and that’s pretty darn hard to do coming from where he started, so I was think I was most surprised and impressed by Bode in Soelden.”

Vonn finished 40th, 11th and 5th in two downhills and a super-G at Lake Louise, Canada, last weekend, but will skip a super-G and GS in St. Moritz this weekend and instead focus on a Dec. 21 downhill at Val d’Isere, where she’s won three times in the past.

Ligety has been on the GS podium (top 3) four times at Val d’Isere, including a World Cup win there in 2010 and a World Championships bronze there in 2009. Five straight victories in GS would break Tomba’s all-time mark.

But what Ligety really wants is the first American Olympic gold medal in the event to go along with the surprise Olympic gold he won in the combined event as a 21-year-old at the Torino Winter Olympics in 2006. That was a race Miller seemed to have a lock on after a dominant downhill before straddling a gate in the slalom portion and being disqualified.

Ligety has said a GS win at the Olympics would be more meaningful than world championships, surpassing his gold medals in GS in Schladming, Austria, last February and Garmisch, Germany in 2011.

“The Olympic gold medal in combined and winning a world championship are very different,” Ligety said after his 2011 win. “The Olympics are bigger and I was the surprise victor in that event so I didn’t have the pressure on me to perform. But being able to perform when you’re supposed to win is far more difficult than just putting it on the line like I did at the Olympics. To be able to put down two good runs and win is that much more special.”

Miller, on the hand, cleaned up at those Games, adding a medal of every color to his two silvers from Salt Lake. In Sochi, if he qualifies in enough events, Miller will have an outside shot at tying Kjetil Andre Aamodt of Norway for the most Olympic medals in an alpine ski-racing career with eight.