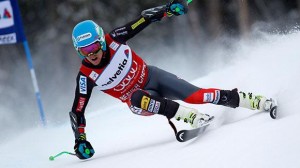 Ligety will be fitted with a special splint to wear while skiing, and doctors anticipate he should be back skiing shortly. However his ability to compete in the super-G Nov. 30 at Lake Louise and the super-G and giant slalom at Beaver Creek the weekend after is in question.

Ligety’s absence at Beaver Creek would be a major blow for a U.S. Ski Team already missing all-time American World Cup winner Bode Miller, who will miss next month’s Birds of Prey races after recent back surgery. Miller, who’s also won four times at Beaver Creek and been on six podiums, is trying to return to action in time for the World Alpine Ski Championships Feb. 2-15 at Beaver Creek.

“Our partners at Vail Resorts have certainly made the most of the temperatures and the real stuff that Mother Nature has provided,” said Michael Imhof, senior vice president of sales and operations for the Vail Valley Foundation and director of the 2015 World Championships. “Thanks to favorable snowmaking conditions and the natural snow we have received, everything is on track for a great weekend of racing at the Audi FIS Birds of Prey.”

Beaver Creek Mountain, which has received nearly four feet of new snow in the past two weeks (including eight inches Sunday morning), is scheduled to open on Wednesday, Nov. 26, while Vail Mountain opened to the public on Friday and received six inches of new snow as of Sunday morning.

According to Opensnow.com, another two to four inches of snow is expected to fall Sunday, followed by another four to seven inches on Monday.

“We are happy to report that snowmaking is 99 percent complete on the race venue at Beaver Creek,” said chief of race Greg Johnson. “Our final snowmaking needs are in the finish area and, with another winter storm forcast for this weekend, along with optimal snowmaking temperatures, we’ll be ready to race.”

The FIS requires a snow control inspection for all World Cup sites in advance of the competitions to ensure that good racecourse conditions exist or that the weather forecast is favorable for sufficient snowmaking.

The 2014 Audi FIS Birds of Prey World Cup Race Week gets underway Tuesday, Dec. 2, with downhill training. Competition kicks off Friday, Dec. 5, with the traditional Birds of Prey Downhill, followed by Super-G on Saturday, Dec. 6. The weekend’s racing will conclude with giant slalom on Sunday, Dec. 7.

The 2014 Audi FIS Birds of Prey World Cup Race Week at Beaver Creek is a project of the Vail Valley Foundation. For additional information on Birds of Prey, visit www.bcworldcup.com.

The FIS World Alpine Ski Championships are scheduled for Feb. 2-15 at Vail and Beaver Creek.