Let’s ski some powder this weekend in honor of the late, great Warren Miller 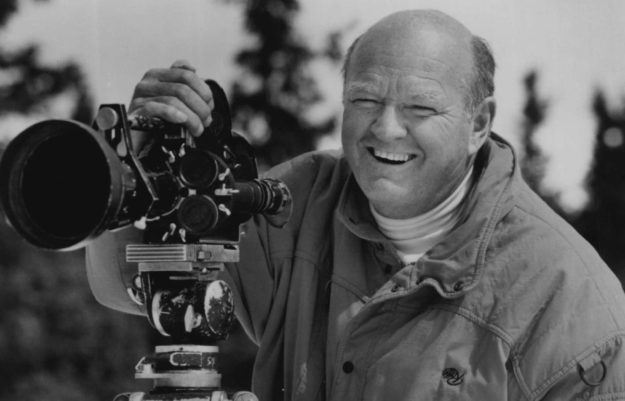 The voice of skiing, Warren Miller, died Wednesday at his home on Orcas Island in the San Juans off the coast of Washington State. And it’s appropriate that snow is in the forecast for Vail on Friday.

That’s because, for me, Miller, 93, will always be associated with powder skiing, which is literally my favorite thing to do on this planet. Miller popularized and documented the ski business in so many films that he can and should be credited with making the ski industry what it is today — a powerhouse in outdoor recreation that’s being celebrated starting today at the Outdoor Retailer Snow Show in Denver.

And Miller lived in Vail for about 10 years, transitioning out of the film business (although he continued to narrate) and into the print business at a time when so many other wise souls were diving out of print as it collapsed economically and went digital.

As a young “Ski Editor” at the Vail Daily in the early 90s (I know, that was an actual job that I held briefly before so seriously deciding news was more important …. what the hell was I thinking?), I had to edit Warren’s column. I say “had to” because it was a bit of a chore in those early days. Eventually, though, he got the hang of it and started syndicating nationally.

But it was a good lesson that dry spoken humor often does not translate into a written form. Remember that next time you try to be funny on social media. Still, Miller stayed relentlessly busy (and funny) very late into life. After he left Vail, I saw him again one more time when I interviewed him at the fledgling Yellowstone Club in Montana.

By then, Miller, who had lampooned many aspects of Vail’s increasingly urban ski (or at least skiburban) experience — including our now quite successful and omnipresent roundabouts — had moved on. He sought out the solitude of a private ski resort where 40 or 50 snow riders might be making turns on a 2,000-acre mountain after a 12-inch dump.

That always struck me as funny because I can’t look at a crowded ski slope like Bear Tree at Vail at 3:30 p.m. without thinking of a Warren Miller movie where skiers look like ants crawling all over an anthill — falling off lifts, getting tangled with each other and generally playing right into his sense of skiing slapstick.

So I’ll be thinking of Warren on Friday when I’m hopefully skiing more than a half a foot of fresh (please under-forecast for us again, Opensnow) and carving my favorite lines down Vail Mountain. In my mind’s camera, I’ll forever be arcing powder turns in a Warren Miller movie.

“A semi-strong yet moisture-starved storm will hit Colorado on Thursday night and Friday morning, delivering 2-5 inches to most central and northern mountains,” Opensnow.com meteorologist Joel Gratz wrote Thursday morning. “If you want to ski fresh snow during the next few days, your best bet will be on Friday morning.

“Following a mostly dry weekend and early next week, the next storm should bring low-to-moderate snow totals on Wednesday and Thursday, January 31 to February 1,” Gratz added. “After that, we could see a few more days of dry weather, and then we might get lucky and see storms return sometime in the February 3-10 time frame.”

Come on, Snow Gods, treat us well the rest of this season in honor of the late, great Warren Miller!