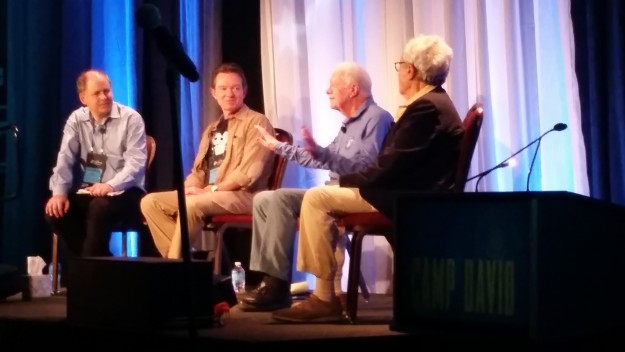 Editor’s note: A version of this story first appeared in the Colorado Statesman:

Toward the end of a special reading of a new play called “Camp David” here Friday, former Israeli Prime Minister Menachem Begin, played by actor Ron Rifkin, wept as he read the names of his many grandchildren inscribed on photos presented to him by President Jimmy Carter, played by actor Richard Thomas.

Just a few feet away in the front row of the Centennial Ballroom at the Vail Cascade Resort, the 39th president of the United States and his wife, Rosalynn, watched intently. There was no denying the power and drama of that pivotal moment during the 13-day peace negotiations between Begin, Carter and Egyptian President Anwar Sadat at Camp David, Md., in 1978.

In a panel discussion following the script reading, Carter told staff and donors of his non-profit Carter Center that the play is largely true and accurate, “within the bounds of dramatic license.” He went on to describe how Begin went from rejecting the peace deal at the 11th hour to finally relenting and agreeing to sign after Carter presented him with those photos.

With the deal broken down over the inclusion of a letter from Carter – at the request of Sadat – restating U.S. policy regarding East Jerusalem, Begin sent a note to Carter asking the president to at least provide some photos of the three men together. Carter’s personal secretary, Susan Clough, without asking her boss, called Israel and got the names of all of Begin’s grandchildren so that Carter could personalize the messages on each of the photos.

“He was very surprised,” Carter, 90, recalled Friday. “When I came to his cabin for that last meeting, he was very huffy. He was kind of angry with me and he was very formal. He took these photographs and began to look at them and call out the names of his grandchildren, as is in the play, and he got emotional.

“I looked over at him, and he was very stern, but he had tears rolling down his cheeks, and I began to weep also, and then he finally said, ‘Well, let’s try it one more time.’”

The result, after 12 days of at-times bitter negotiations between the Israelis and the leaders of the region’s most powerful Arab nation, was a pair of historic peace accords that in many ways have withstood the test of time. All three men would go on to win the Nobel Peace Prize.

“Just to put it in its larger historical context, since 1978, not a single Israeli has been killed by an Egyptian and not a single Egyptian has been killed by an Israeli, and it is the most enduring peace of the modern era,” noted moderator Jonathan Alter, a longtime senior editor and columnist for Newsweek and a New York Times best-selling author who’s working on a new book about Carter.

“What I hope and what Lawrence has already said is this play … when it goes to San Diego, when it goes to Broadway … it will remind people that hopelessness ought not to be accepted and that there are courageous and dedicated leaders in the world still,” Carter said. “My hope is it will have some effect on turning what seems to now be a hopeless case back into a positive case.”

Carter, who narrowly defeated Vail Valley icon Gerald Ford in November of 1976, was soundly beaten by Ronald Reagan in November of 1980. On Friday he said that if he’d been elected to a second term, he would have forced Begin to adhere to his Camp David pledge not to build new Israeli settlements in the occupied territories while peace negotiations continued.

“If I could have stayed in office as present of the United States. I could have insisted on implementing all of the terms of the Camp David Accord.”

“Mr. President, I’ve always felt that if you had been reelected, that we would not have been at the inaugural ball, that you would have been in Israel making it a comprehensive peace, and we’d have faxed in the oath of office,” said Rafshoon, who is producing the Camp David play.

Carter said the lowest point of the Camp David negotiations came when Sadat made arrangements to abandon the talks and leave Maryland. Carter confronted him, and in a heated exchange that seemed out of character for the soft-spoken, devoutly religious southern president, he threatened to end their long-running friendship and to withdraw the support of the United States for Egypt.

Sadat – the subject of death threats from his own contingency during Camp David — relented and agreed to stay. His friendship with Carter would continue until Sadat’s assassination by members of his own military only eight months after Carter left office in 1981.

Despite their angry words and the strain on their personal friendship, Carter said he and Sadat mended fences toward the end of the Camp David talks, watching a boxing match between Muhammed Ali and Leon Spinks on Sept. 15, 1978.

“We healed our wounds that night watching that heavyweight fight together,” Carter said with a smile.