The making of any band usually follows the same trajectory. First, practice your instruments. Then, play some gigs. Eventually, get a record deal and try to make it big. 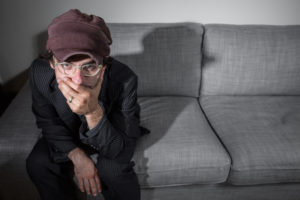 The indie-rock group Clap Your Hands Say Yeah was one of the first bands whose career followed a different path: get famous on the internet before you even make an album.

Clap Your Hands Say Yeah will kick off the Fall Underground Sound Series at the Vilar Performing Arts Center (VPAC) on Saturday, Sept. 22 at 7:30 p.m. Tickets are $30 and are available now at the VPAC box office (970-845-8497; www.vilarpac.org).

The full VPAC Fall Underground Sound Series is available for $125, which includes all 7 shows and 7 drink passes. The VPAC is located under the ice rink in Beaver Creek Village (68 Avondale Lane, Beaver Creek, Colorado).

Clap Your Hands Say Yeah formed in 2004 in New York City, often playing buzzed-about shows in Manhattan and Brooklyn. Both David Bowie and David Byrne attended these early performances and many popular music blogs wrote about the band frequently. Clap Your Hands Say Yeah self-released its first album in 2005, which NPR’s All Songs Considered would go on to name as one of “The Decade’s 50 Most Important Recordings” in 2009.

Almost nothing is ‘traditional’ about this band. Originally a group, Clap Your Hands Say Yeah is now more of a solo effort from lead singer and guitarist Alec Ounsworth. In 2017, Clap Your Hands Say Yeah released its fifth and latest album, “The Tourist.” Filled with catchy melodies and introspective lyrics, the record showcases Ounsworth’s new musical direction and evolution since the mid-2000s.

“With renewed confidence, focus and contentment, Alec Ounsworth delivers a consistently satisfying Clap Your Hands album, the best since their debut,” raved Pitchfork in their initial review.

The indie spirit of Clap Your Hands Say Yeah is the perfect start to the Fall Underground Sound Series, which aims to expose VPAC patrons to new music and emerging artists. Featuring seven diverse performances across a range of music genres and styles, Underground Sound is a highlight of VPAC’s fall lineup.

The Underground Sound pass grants patrons tickets to seven shows and seven free drinks for just $125 (that’s a savings of over $100). It’s fully transferable, and locals, visitors, and music lovers are invited to come have a drink at the VPAC and share in the discovery of new sounds.