Independence Pass set to open May 22 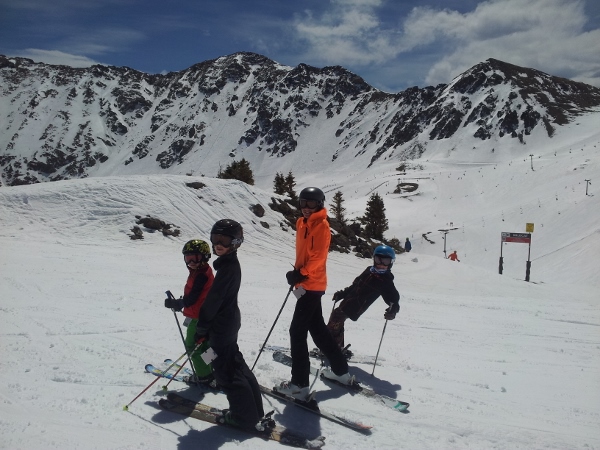 Conditions were incredible Sunday, May 4, at Arapahoe Basin, which plans to stay open until June 1 (David O. Williams photo).

And there’s only one ski area still providing lift access to the goods: Arapahoe Basin in Summit County. The Basin plans to stay open until June 1, unless enough new snow falls in coming weeks to extend the ski season beyond that date. A-Basin has stayed open till July 4 in the past.

According to forecasters, a substantial amount of new snow will fall on A-Basin starting Saturday night and lasting into Monday.

“Total precipitation from Saturday night through Monday should be around 1-2 inches of liquid equivalent, so that could mean 10-20 inches of snow on the peaks, especially along the [Continental] Divide,” meteorologist Joel Gratz of Opensnow.com wrote Thursday.

“Monday might be a great time to enjoy powder turns at A-Basin as there will have been significant snow Sunday and Sunday night with more snow falling during the day on Monday.”

With Loveland closing on Sunday, A-Basin is now the only place in the state to get in-bounds turns. The 67-year-old resort has a base elevation of 10,780 feet and a summit elevation of 13,050 feet. June 1 is a very realistic closing date given the current 77-inch base, with five inches of new snow in the last two days and a lot more on the way.

“We could extend the season based on conditions, and part of that is seeing what this next storm does for us,” said A-Basin spokeswoman Adrienne Saia Isaac, adding the resort will keep as much skiable acreage open as possible. Ski patrol decides on a daily basis, basing decisions on snow conditions and weather.

“Much of our steeper terrain has been closed due to warm temperatures as of late, but we do reevaluate daily and there is a possibility that the steep terrain could re-open,” Saia Isaac said. “But, we’ll keep the season going as long as we can, and keep as much terrain open as possible for our guests. And, if the forecasts are right, this storm could really be big for our mountain.”

A-Basin chief operating officer and vice president Alan Henceroth blogged on Tuesday that A-Basin’s famed Pallavicini run and the North Glade gates closed on Monday due to warm temperatures that caused melting in the huge snowpack. Water in the snow adds weight and affects snow stability. Colder temperatures and fresh snow would improve that situation.

“This may not be for good,” Henceroth wrote of the closures. “In the coming days, we are forecasted to see a bit of snow and cooler temperatures. If conditions change, a re-opening of the steep stuff is possible. Stay tuned.”

Independence Pass between Leadville and Aspen is slated to open May 22, weather permitting, according to Colorado Department of Transportation (CDOT) officials.

CDOT tries to have the pass open on the Thursday before the unofficial kickoff to summer – the Memorial Day weekend. Last year the pass that provides a key east-west link between Aspen and the rest of the state opened on May 23.

“Each year, CDOT sets a goal to get the 12,095-foot pass open on this day,” CDOT officials said in a press release Thursday. “It is always completely dependent on weather conditions and, of course, the amount of work necessary to clear the road and carry out other maintenance items.”

Crews must clear up to 12 avalanche slide paths, move concrete barriers to clear ditches, possibly blast and then haul out any rocks that have come down during the long winter, patch potholes and fix any guardrails or signs that have been damaged.

An open Independence Pass would have been a big help on Thursday after westbound Interstate 70 was closed for eight hours while the Colorado State Patrol investigated the non-fatal shooting of a state trooper in Glenwood Canyon. The suspect was shot and killed by another state trooper.

It was a particularly bad winter season for closures along the I-70 corridor, with the highway shut down for much longer periods of time than in past years.

For roadway conditions and other information go to www.cotrip.org or call 511. Sign up to receive free road condition messages via e-mail or wireless devices by going to www.coloradodot.info and choosing the green phone icon in the upper right-hand corner.