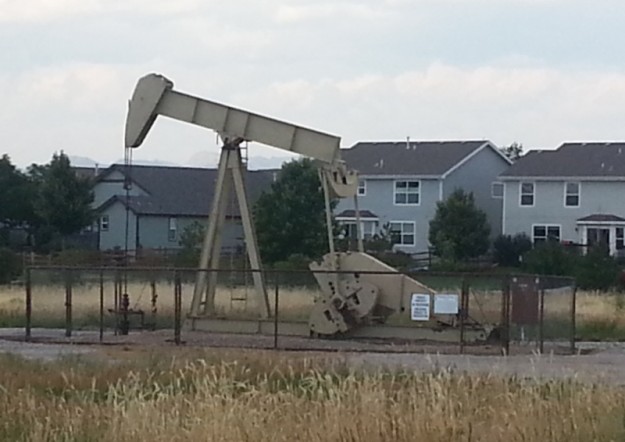 The seemingly endless barrage of television ads opposing Proposition 112 would seem to be wasted on Eagle County voters, who for the most part don’t have to worry about oil and gas drilling rigs cropping up a few hundred feet from homes and schools. The ballot initiative would increase the setback distance from its current 500 feet to just under a half mile at 2,500 feet.

There just isn’t any natural gas drilling going on in Eagle County, so why are we seeing so many opposition ads paid for by the oil and gas industry on our local airwaves? Well, for starters, there’s a huge amount of natural gas just to our west in Garfield County, where for years there have been conflicts over drilling setbacks, contaminated water and the risks of natural gas.

Then there’s the pivotal role energy production and environmental concerns are playing in the gubernatorial race between Democrat Jared Polis and Republican Walker Stapleton. Polis, a U.S. congressman from Boulder who’s represented the eastern third of Eagle County since 2010, once supported increased setbacks after drilling impacted property he owned in Weld County.

Polis now opposes the setback question because it doesn’t address surface-use agreements that allow property owners to negotiate drilling locations with the companies that own the mineral rights under their land. Stapleton, the state treasurer, also opposes Proposition 112 because he says it will devastate our economy by shutting down drilling and costing thousands of jobs.

The oil and gas industry has countered with a proposed constitutional amendment that would allow private property owners to more easily sue governments that impose regulations impacting their property. Both Polis and Stapleton also oppose Amendment 74, although Stapleton lauds the concept of the amendment while rejecting its “unintended consequences.”

I delved more deeply into the nuances of both candidate’s positions on Proposition 112 and Amendment 74 in a cover story for Colorado Politics earlier this week, and I also spelled out the more substantial differences between the two on a wider array of energy and environmental issues in a Vail Daily story on Oct. 25.

Both stories include a closer looking at an electric vehicle rulemaking process going on at the behest of the man both candidates want to replace – term-limited two-term Democratic Gov. John Hickenlooper. For more on that process, check out this story in Colorado Politics.

And here’s the Vail Daily story in its entirety:

Energy and environmental issues have surged to the forefront of the battle between longtime Democratic U.S. Rep. Jared Polis and Republican state treasurer Walker Stapleton to become the next governor of Colorado on Nov. 6.

Both men were asked detailed questions about climate change and state energy production at the final gubernatorial debate on Tuesday, Oct. 23 in Denver, and their answers provided very clear contrasts between the two major-party candidates hoping to replace term-limited Democratic Gov. John Hickenlooper.

“Climate change isn’t just an abstract issue,” Polis said Tuesday in Denver. “It’s already affecting important Colorado industries like agriculture, like the ski industry. It affects our water., which is our life source and a source of our economy in Colorado. So we need to act and we need to act now.”

Polis once again touted his “bottom-up, market-oriented plan” for Colorado to move to 100-percent renewable energy by the year 2040. Just under 20 percent of the state’s current electrical mix is renewable, with 47 percent generated by coal and 34 percent from natural gas.

“We don’t want government mandating what power we need to use,” Stapleton said. “And I’ve spoken with energy experts who tell me that if Congressman Polis’ mandate were put into place, it would result in hardworking Coloradans paying more for their electric bills, more to heat their homes. And that’s a radical, extreme proposal.”

But Polis counters that wind energy is already coming in cheaper than coal-fired power, so he’s proposing – not mandating – a package of incentives and state programs to continue to build on the successes of the past two Democratic administrations. He also said his plan will be particularly effective if Democrats win control of both chambers of the state legislature.

Stapleton shot back that Polis’ plans – from energy to health care to education – will balloon the state budget and ultimately result in higher taxes.

The two candidates also differ significantly on the issue of electric vehicles, which Hickenlooper championed in June by signing an executive order (pdf) requiring the state to develop a rule adopting the California Low Emission Vehicle (LEV) program, which can include gas-electric hybrids. In August, there was support from conservation groups and local governments for both the LEV and the tougher ZEV standard, which is just plug-in and battery electric vehicles.

“Walker’s position on ZEV is the same as LEV — it would hurt Colorado,” Stapleton spokesman Jerrod Dobkin said. “But ZEV would have even worse effects, and Polis has supported this at the federal level.”

Hickenlooper made his move in part because of the U.S. Environmental Protection Agency’s efforts “to roll back vehicle greenhouse gas and fuel efficiency standards for model years 2022 and beyond.”

“Clean air is incredibly important to our health, especially for our kids and seniors,” Polis said in a prepared statement on the LEV standard. “I support and will continue Gov. Hickenlooper’s efforts to meet the growing demand for low-emission vehicles while fighting pollution, protecting our air quality and addressing climate change.”

For the first time ever, the Colorado Auto Dealers Association recently endorsed a gubernatorial candidate, giving the nod to Stapleton. And the Alliance of Automobile Manufacturers opposes the ZEV mandate because Colorado is already trending ahead of the national average with 1.5 percent of all new car sales electric. The national average is just 1 percent.

On the topic of oil and gas drilling, both Polis and Stapleton oppose Proposition 112, increasing setbacks for drilling operations, and Amendment 74, a private property takings measure supported by the oil and gas industry.

Stronger setback measures imposed legislatively on a bipartisan basis should be “a backstop for when the landowner and operator can’t reach a surface-use agreement,” Polis told Colorado Oil and Gas Association members in August.

“[Stapleton] has said numerous times he is completely against this ballot initiative [112],” Stapleton spokesman Dobkin said in an email. “Also, it is important to note Polis has bankrolled a ballot measure to increase setbacks to 2,000 feet. A 2,000-foot setback is just as radical as a 2,500-foot setback and could have led to 62,000 job losses and an $11 billion decrease in Colorado’s gross domestic product.”

In 2014,  drilling near his Weld County property prompted Polis to back two ballot questions – one of which would have increased setbacks for drilling operations to 2,000 feet away from occupied structures. Polis wound up pulling his support for those ballot questions after striking an 11th-hour deal with Hickenlooper.

Now a group called Colorado Rising has landed the statutory initiative Proposition 112 on the ballot. The state’s oil and gas industry, working with the Colorado Farm Bureau, has countered with constitutional Amendment 74, “requiring the government to award just compensation to owners of private property when a government law or regulation reduces the fair market value of the property.”

Polis told the COGA meeting: “[Amendment 74] would have far-reaching ramifications well beyond oil and gas development. Does anybody in this room really believe that local government or state government should not be able to zone for hog farms, cannabis, or strip clubs?”

Stapleton also opposes 74, although he is supportive of bolstering private property rights.

“Walker has said he is supportive of the concept but thinks there could be unintended consequences,” Dobkin emailed. “He would support using the legislative process to address concerns different stakeholders have.”