Colorado Gov. John Hickenlooper, a Democrat, is mulling over signing a bill that would phase in grocery store sales of full-strength beer and wine in Colorado. Proponents say it’s needed to head off a ballot initiative that would allow unlimited grocery store liquor sales next year.

Liquor store owners in Eagle and Summit counties are watching intently as Colorado Gov. John Hickenlooper mulls signing into law or vetoing Senate Bill 197, a bid to head off a ballot initiative that could allow grocery stores to sell full-strength beer and wine next year.

Sponsored by state Sen. Pat Steadman, D-Denver, and overwhelmingly passed with bipartisan support late in the legislative session, SB197 (pdf) provides a phased pathway to large, chain grocery stores each holding up to 20 liquor licenses over the next 20 years and an unlimited number after that. It also requires grocery stores to buy licenses from nearby liquor stores.

Current law dating back nearly 90 years allows only one company or individual to own a retail liquor license in Colorado, keeping the state’s retail liquor industry small and mostly locally owned. But grocery giants Safeway and Kroger (King Soopers and City Market) are funding a ballot initiative that would allow grocery stores an unlimited number of licenses next year.

Fearful the ballot initiative may pass in November, putting many of the state’s 1,650 mom-and-pop liquor stores out of business overnight, the Colorado Licensed Beverage Association spearheaded a compromise bill that allows grocery chains five licenses in 2017, up to 20 by 2037 and an unlimited number after that.

Steadman hopes two decades will be plenty of time for mom-and-pop shops to either adjust their business models or sell their licenses to the big grocery chains, thus recouping their investments.

“I like to describe what happened with this bill this year as giving retail liquor store owners an opportunity to sit down at the table and pick their poison, and by that I mean that their industry is going to change,” Steadman told RealVail.com last week.

“For 87 years now we’ve required them by law to only have one store, one license and no other interests in the industry, and by law we’ve made them vulnerable to … special interests coming in and changing the law for their benefit and really overrunning all of these retail stores.”

But earlier this week Hickenlooper told reporters he’s hearing from many small liquor store owners who don’t want to wave the white flag and would prefer to fight the big grocery chains in a costly ballot-box battle that will likely keep cropping up even if it’s defeated this year. 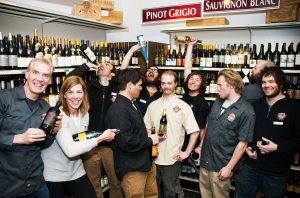 “We think SB197 will work, and it’s certainly a far better solution than having all that money – at least $30 to $40 million – wasted on another expensive political ballot initiative in November,” said Laurie Mullen of West Vail Liquor Mart. “The corporate stores have pledged huge amounts of dollars if it does go to the ballot.”

Steadman said the Legislature recognized the bill was necessary, passing it 31-4 in the Senate and 57-7-1 in the House. Efforts to change Colorado’s liquor laws have been under way since the 1980s, he said, and will continue until things change.

“This is a debate that’s been going on for years, and the Legislature’s pretty up to speed on the latest round of the beer wars,” Steadman said. “When there was an agreement that at least 90 to 95 percent of the liquor sales universe was on board with, that’s what members of the Legislature needed to hear.”

The bill requires a grocery store looking to acquire a liquor license to buy it from any liquor store within 1,500 feet of their store in the city or 3,000 feet in towns, but those liquor stores also have the right to refuse to sell to the grocery chain. Liquor stores will also be able to start selling food items that are prohibited under current law, allowing for more diverse business models.

“In a nutshell, the bill gives liquor store owners the chance to either operate or sell their businesses,” said Laurie’s husband Tom Mullen of West Vail Liquor Mart. “More importantly, it creates stability for small businesses like ours, and with that stability we’re able to confidently spend money on improvements, hire more employees and have more community involvement.”

“It gives the liquor store owners and opportunity to determine the fate of their businesses without the out-of-state, big-box stores – Safeway and King Soopers – just coming in to take their business. That’s the first reason,” Leifheit said.

Before first being elected mayor of Denver and later governor of Colorado, Hickenlooper was the co-founder of the state’s first brewpub, Wynkoop Brewing Company in downtown Denver. According to Steadman, the governor is meeting with proponents of his bill next week and has until June 10 to decide whether to sign the bill into law.

“I have a sign on my door right now that says, ‘Congratulations Summit County grads, but if you’re reading this sign, you’re in the wrong place. Twenty-one means 21,'” Leifheit said. “Young people can’t go into liquor stores and buy booze. If you put wine and full-strength beer in grocery stores, then children of all ages can walk through the store unsupervised, just by definition”