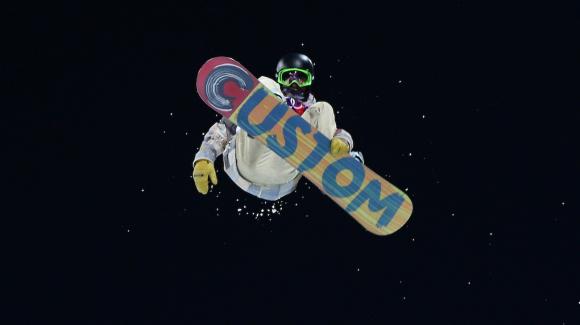 Bluebird skies and a perfectly built halfpipe enabled a full-throttle competition with all the riders adding their own style to the sport’s progression, including Taku Hiraoka of Japan and David Habluetzel of Switzerland, who took the second and third spots on the men’s podium. Highlights of the halfpipe final are set to air on Fox Sports 2 on Monday, Mar. 17th at 5:30 p.m. MST.

“My mind is blown,” said Gold, an Olympian in Sochi who just missed the men’s final there. “I can’t believe it. This was the best contest of the year just in terms of the venue and the crowd and everything, so just to do it here is unreal.”

“I was super stoked on my run,” said Gold, 20. “I was nervous coming in. You stand up there for so long. You’ve got to kind of hone in and focus, so I was just so stoked to put the first one down and get rid of those jitters.”

Ben Ferguson (Bend, Ore.) landed just off the podium in fourth with his 14-year-old brother Gabe Ferguson (Bend) in sixth. Local Vail rider Jack Pates put on a show for the crowd, finishing seventh, while veteran Louie Vito (Sandy, Utah) wound up eighth after he wasn’t able to clean up his run.

“We all rode well this summer and it kind of led into good finishes throughout all the events leading up to the Olympics,” Gold said of the young talent on display. “So it’s awesome that there’s all these young guys ripping.”

Clark, a bronze medalist in Sochi and Vancouver in 2010 anda  gold medalist at the 2002 Winter Olympics,  delivered a run earlier in the day that included a frontside 1080 indy, Cab 720 mute grab, indy to mute grab, backside 540 tail grab, frontside 900 indy, and a backside air, scoring an 89.33.

The 30-year-old Clark holds the honor of the most wins in US Open history. In other achievements, Clark picked up her fourth World Snowboard Tour halfpipe title Saturday.

“The US Open means a ton to me,” said Clark. “I grew up nine miles away from the US Open [in Vermont before it moved to Vail two years ago]. It really holds a near and dear place in my heart. If I could pick a contest to win, it would be this one. I’m really happy I was able to put down my run today.”

Taking second place honors behind Clark was 2014 Olympian Queralt Castellet of Spain followed by Californian Chloe Kim, who landed her first podium at the US Open. At just 13 years old, Kim became the youngest World Snowboard Tour Overall Champion with her win Saturday.

In addition to achieving extraordinary halfpipe results for her age (13), including a silver medal at X Games, she managed to land two slopestyle results this season — fifth place at the US Rev Tour and 11th in USASA Nationals.