So Indianapolis Colts’ owner Jim Irsay is “frustrated” he only won one Super Bowl during the 14-year Peyton Manning era? I think he has every right to be, and I also think Manning will never be considered among the top five greatest NFL quarterbacks until he wins at least one more ring – and even then he may be on the outside looking in. 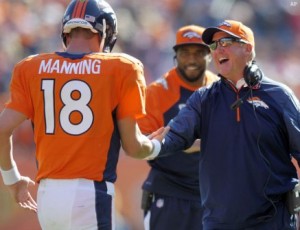 Here’s my top five list, using the tough-but-fair criteria of playoff wins combined with championship rings. It is, after all, a results-based league:

I’d love to put Elway on my top five list because I’m a diehard Broncos fan, and he did go 14-7 in the playoffs, tying Bradshaw for the third-most post-season victories. But Elway was 2-3 in Super Bowls because of the mind-numbingly conservative play calling of coach Dan Reeves in the 1980s and the seriously subpar defenses and even supporting offensive casts around Elway.

Would Broncos’ owner Pat Bowlen have been “frustrated” with just one ring if Elway had been too injured to play after beating Favre and the Packers in 1998? Probably. But the utter humiliation of being crushed by the Redskins, Giants and 49ers in three previous Super Bowls would have eased that frustration.

Still, a badly hobbled Elway didn’t sit out in ’99. He came back and annihilated Reeves and his “Dirty Bird” Atlanta Falcons in Super Bowl XXXIII. What if Elway had been too injured to play that season and the Broncos fell to 2-14 and had a chance to draft their next franchise QB?

OK, bad example. There was no Andrew Luck or Elway in the ’99 draft. The best QB was Donovan McNabb – taken second overall by the Philadelphia Eagles – and he’s tied with Peyton at nine playoff wins, but McNabb never won it all. Which brings us back to Peyton and his ungrateful former owner Irsay.

There are six guys tied with nine playoff wins each: Peyton Manning, Joe Flacco, Kurt Warner, McNabb, Jim Kelly and Starr. Of that group, Starr is in a class by himself, and Warner, Manning and Flacco are all tied with “just” one Super Bowl ring. Kelly and McNabb would have loved “just” one.

There are a few two-ring guys I would actually rank ahead of Peyton, Flacco and Warner. Peyton’s little brother Eli (eight playoff wins); Roger Staubach (11-6 in the playoffs with the Cowboys); Ben Roethlisberger (10-4 for Pittsburgh) and Jim Plunkett (eight playoff wins).

A couple of other eight-playoff-win guys include Steve Young, who filled Montana’s cleats with a Super Bowl win in 1995, and Miami’s Dan Marino, who put up all-time “Star Wars numbers” but never won it all. Ask Marino if he would have been happy with “just” one ring.

Here’s the problem with all of this. If you just base greatness on playoff and championship success, you overlook the team nature of the sport. Here’s what Irsay, whose Luck-led Colts take on Manning’s Broncos Sunday in Indy, told USA Today earlier this week:

“(Tom) Brady never had consistent numbers, but he has three of these,” Irsay said, showing off his 2007 Super Bowl ring won by Peyton and the Colts over the Chicago Bears. “Pittsburgh had two, the Giants had two, Baltimore had two and we had one. That leaves you frustrated. You make the playoffs 11 times, and you’re out in the first round seven out of 11 times. You love to have the Star Wars numbers from Peyton and Marvin (Harrison) and Reggie (Wayne). Mostly, you love (the ring).”

First of all, for Irsay to even bring up Baltimore is an insult. His father Robert snuck the Colts out of that city in the 1980s and moved the team to Indianapolis. And the Ravens mostly won their rings with defenses led by Ray Lewis. Flacco got the last one, and Trent Dilfer, who will never land on anyone’s all-time greatest list, won the first one in 2001 throwing for 153 yards and one TD.

And speaking of “Star Wars numbers,” it’s laughable to say Brady never put them up. How about his record for 50 touchdown passes in his undefeated season (until Eli bounced him in the Super Bowl back in 2008)?

Denver coach John Fox was right to call him “ungrateful,” but Irsay makes a good point about one-and-done playoff exits. Peyton Manning has a losing record in the playoffs at 9-11, so he needs to make a deep run and win another title in the next couple of seasons before he retires in order to forever shake his “Greatest Regular Season Quarterback” title. Just like Elway needed those two rings to get him out of the ring-less class of QB greats that includes Kelly, Marino and Fran Tarkenton.

Denver sports fans agree with Irsay that just making the playoffs is not enough. Look what happened to one of the greatest regular-season NBA coaches of all-time, George Karl. After a decade of first-round exits and despite a Coach of the Year award, Karl was shown the exit after last season.

And Carmelo Anthony, arguably the greatest basketball player in Nuggets’ history, will never go down as one of the all-time NBA greats unless he wins “just” one ring …. and it might take two. Sorry, that’s just the way success is measured in sports.

2 Responses to ‘Frustrated’ Irsay is right, Manning does need at least one more Super Bowl ring