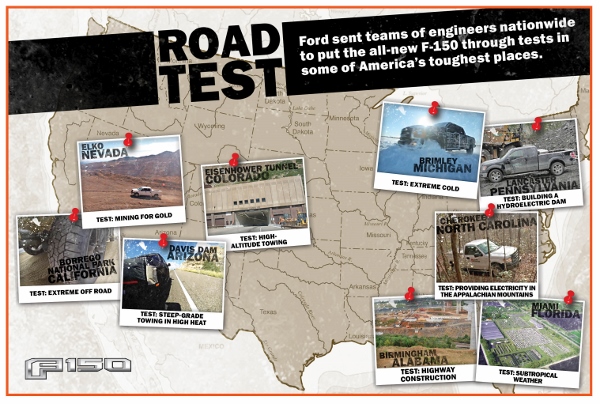 If you are a frequent traveler on I-70 between Denver and Eagle County, you have probably noticed mysterious vehicles decorated in odd patterns or black and white camouflage with no reference to the manufacturer. Ever wonder what these vehicles are doing way up on the mountain passes? Ford has offered some insight.

Ford sent a team of 80 engineers to Colorado’s continental divide to put the all-new F-150 through one of the toughest tests imaginable – climbing the Eisenhower pass during the hottest days of summer.

The caravan of Ford trucks had to make it over the Eisenhower pass that peaks at 11,158 feet of elevation, pulling a maximum load up the steepest grade and some of the sharpest curves in the continental U.S. Added to the stress was testing in high heat with that air conditioning running at full blast. They didn’t just do it once.  They made 250 attempts over five days, all without fail.

“This high altitude testing contributes to the meaning behind “Built Ford Tough”, said Robert McMann of AutoNation Ford in Littleton, “We are proud to sell our customers a vehicle that has already been tested under the conditions that they will likely find themselves driving in. Colorado drivers need a vehicle that can tackle the winding mountain roads with no problem and that’s what we provide in the F-150.”

The new F-150 not only towed trailers over mountain passes 11,000 feet above sea level, it also withstood frame-punishing terrain on an off-road course and conquered a frozen lake at minus 40 degrees. It endured high-humidity chambers, salt vats and riverbeds. The F-150 towed heavy loads up grueling, steep roads. Robots slammed its doors and tailgates, and dropped heavy objects onto the bed of the truck. It persevered through twisting and shaking from multiple directions.

For those of us that drive through the high country often, we know how difficult it can be on our vehicles. It is good to know that Ford has our back.