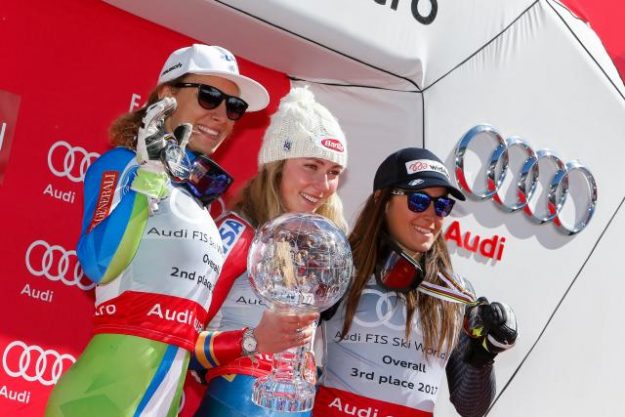 Eagle-Vail’s Mikaela Shiffrin didn’t win a race over the weekend in Aspen, but she won the World Cup circuit’s most coveted trophy by claiming the season-long overall crystal globe.

Aspen, by all accounts, put on a remarkable World Cup Finals, but was rewarded with a swift kick in the ski pants by the International Ski Federation, which pulled the iconic Colorado ski resort from its regular-season World Cup schedule.

Shiffrin is an example of how overall consistency and general excellence (she won an astounding 11 World Cup races this past season) can be recognized despite a surprising lack of success during a huge event on home snow. Shiffrin was a shocking second in her signature slalom event on Saturday, and then a distant sixth in Sunday’s giant slalom.

Aspen is an example of how U.S. ski areas play second fiddle to European resorts when it comes to hosting World Cup ski racing. American resorts are often an afterthought in terms of both scheduling and frequency of big events like the World Cup Finals, which had not been held in the U.S. since Vail in 1997.

Granted, even Aspen officials admit problems with a base area that includes a shuttered restaurant and an old double chairlift (the chief complaints of FIS officials), but steps are being taken to fix the issue. Why break the continuity and momentum after the Finals by denying Aspen its usual November women’s races?

At Sunday’s FIS Alpine Ski World Cup Finals giant slalom in Aspen, CO, Italian Federica Brignone proved too fast for any of the racers to catch, after taking almost a full second lead first run and building on it second run. Brignone led an Italian sweep, with her teammates Sofia Goggia in second and Marta Bassino third. Shiffrin finished sixth. “I’m not very satisfied,” said Shiffrin. “I felt like I had some really good turns, but I didn’t take enough aggression when I really needed it. It’s a bit of a bummer, but it’s good motivation for next year.”

Shiffrin was able to celebrate her season-long accomplishment on Sunday, when she was given the overall crystal globe, signifying her best in the world status throughout the 2016-17 season. But she’s not satisfied yet.

“It has been something I’ve dreamed about,” said Shiffrin, who turned 22 while in Aspen. “It still doesn’t feel real, though. It’s like you’re constantly chasing this dream and as soon as you get it, you realize it’s still so far away. I’m so motivated to get better and I think that’s a good thing.”

The men raced slalom Sunday with Andrew Myhrer of Sweden taking first, Felix Neureuther of Germany second and Michael Matt of Austria third. Marcel Hirscher of Austria was crowned overall World Cup champion for the sixth year in a row, a title he clinched weeks prior to Aspen.

The World Cup Finals wrapped the season, but the Americans still have the U.S. Alpine Championships taking place March 25-28 at Sugarloaf Mountain in Maine.

(On the World Cup Finals GS)
I’m not very satisfied. I felt like I had some really good turns, but I didn’t take enough aggression when I really needed it. It’s a bit of a bummer, but it’s good motivation for next year.

It’s physically grueling—it’s 60 seconds as hard as you can go. On most training days, we’re doing 12 of those runs. It’s a full-on workout. It’s pretty incredible to know that we can actually do that—how far you can actually push your limits and push your body right at the end of the year. It’s tiring physically and mentally. There are so many emotional rollercoasters that you just want to take a nap for three days straight.

It has been something I’ve dreamed about. It still doesn’t feel real, though. It’s like you’re constantly chasing this dream and as soon as you get it, you realize it’s still so far away. I’m so motivated to get better and I think that’s a good thing.

I’m really proud of the team around me: my coaches, my mom, all the people who have really been there this entire time, supported me the entire time. They’ve been in my dark moments and the bright moments too. There’s a big group of people that support me—sponsors and everybody, but there’s a small group of people who are with me every second and know me the best. I’m very thankful for them.

(On what’s next)
My goal right now is to race in speed at the Olympics, and a little more speed next year. But it’s really challenging. I raced a few super G racers this year and two downhills and even that was very tiring. I still focused on my main events, but as I get older and more confident and stronger, then I can add more speed.

I was thinking about next year at the beginning of this year. There’s always things to think about and there’s so much planning going into next season, especially with the Olympics. We’re planning summer ski plans and conditioning training and the season and how we’re going to manage traveling—there’s a lot that goes into it. I’m already thinking about it—I have been for a while.