Fending off the vultures: Can journalism be saved? 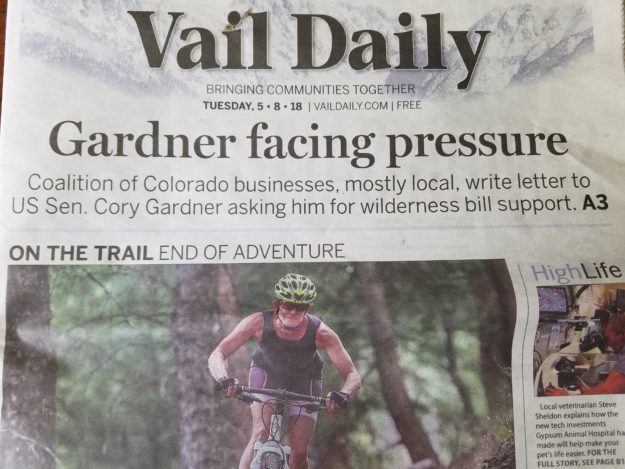 Coming full circle and increasingly freelancing for the Vail Daily. Trying to save journalism in a brutal era for freelancers and staffers.

Two stories I spent a lot of time on recently drew some of  the best traffic on Colorado Politics in the last couple of weeks, with my print-version cover story on illegal marijuana growing on public lands topping the political site’s “Most Popular” list in late April and my piece on the impact of the #MeToo movement on the Colorado governor’s race a close second.

The pot story also ran in the Colorado Springs Gazette, and while the number of online eyeballs hasn’t been huge — with both stories hovering around 800 unique views — I think it demonstrates the value of freelancers in an underserved journalism market that’s getting decimated by Denver Post owner Digital First Media and its vulture capitalist overlords, Alden Global Capital.

It’s been more than a decade since the Post – a frequent freelance buyer for me throughout the 1990s and early 2000s – purchased one of my stories. So not only have they gutted local journalism after “winning” the war with the Rocky Mountain News in 2009 and plunging the Post’s current numbers below Salt Lake City staffing, but they’ve also shafted freelancers like me.

Why should readers care? Why should they have to pay attention to who owns what in the fractured and beleaguered world of print media? Because content is still king, even (or perhaps especially) in the digital era. Well-reported and well-written stories are still very much in demand from readers, even if it’s increasingly difficult for publishers to monetize that content.

Ownership matters, just as much as #NewsMatters, because you can’t have one without the other. Dumb it down too much, strip away too many reporters and editors and the product will suffer …. and the readers will go elsewhere. Hedge-fund owners don’t care because that’s their business model: gut the product, squeeze every dime out of it, and discard the lifeless husk.

Every business model – and I’ve worked for them all – has its flaws. But the Alden model appears to be the worst of the bunch. Family ownership, or at least some sort of privately held consortium, seems to work the best, and non-profit news is somewhere in the middle.

Since I last drew a regular paycheck from family-owned newspapers in the Vail Valley in the late 90s (Swift’s Vail Daily) and early 2000s (the Knox family’s Vail Trail), I’ve been paid by just about every publishing model there is – from the left-leaning Colorado Confidential/Colorado Independent to the far more conservative Colorado Statesman/Colorado Politics.

Colorado Confidential started as a nonprofit, blogger-driven news site in the mid-2000s. It was funded in part by deep-pocketed Colorado Dems like Jared Polis (pre-Congress), Pat Stryker and Tim Gill and later morphed into the Colorado Independent under an umbrella of swing-state websites run by a Washington, D.C.-based nonprofit board.

Polis drew the ire of the mainstream media and some news consumers when he crowed about bloggers killing the 149-year-old Rocky Mountain News in 2009. I worked for the Rocky through college at Metro State and then as a freelancer right up until the bitter end. But by then I had also started working for Colorado Confidential.

That top-heavy model, for me at least, fell apart in 2012 when donors declared victory and started shutting down swing-state sites. Holdover John Tomasic joined Post veterans Susan Greene and Mike Littwin in salvaging the Colorado site in the form of TCI, but apparently there wasn’t much of a freelance budget left over for journos toiling in the hinterlands.

For a while there I worked for a donor model out of Aspen called the Mountain iJournals until that failed in predictable fashion. Simultaneously I was working with my former Vail Daily and Colorado Confidential cohort Cara DeGette on a site called Colorado Public News, which utilized a Colorado Health Foundation grant to do some good healthcare reporting that was then pushed out to papers across the state … until those funds dried up. You get the picture.

Finally, I started working on a somewhat regular basis for the venerable Colorado Statesman in 2015 only to see the 119-year-old publication become mired in yet another ownership transition when Phil Anschutz’s Clarity Media bought out investor Larry Mizel and turned the Statesman into Colorado Politics in 2017.

Anschutz reportedly owns the Rocky Mountain News name and wants to acquire the remnants of the Post – perhaps to shut it down and restart the Rocky? – but I’d love to see another group like the one anchored by Colorado Springs Independent founder John Weiss pick up the Post to serve as a counterweight to Anschutz’s growing media empire.

Beggars, however, obviously can’t be choosers, so it would be nice to see the Post survive, whatever it takes. That may mean completely boycotting and burning it down to force Alden to sell the cremains. I’m tired of seeing longtime brands like the Statesman, Vail Trail and Rocky Mountain News disappeared forever – oftentimes erasing my work on their archives.

I’ve come full circle in recent weeks, writing on a more regular basis for my first paper out of college, the Vail Daily, covering stories on wilderness legislation, the local health-insurance crisis and local police support for a red-flag bill that just died in the Senate.

I once pompously proclaimed I wouldn’t talk to a Daily reporter after their parent company, Swift, acquired the old Vail Trail. I was only speaking to independent papers. Now I could give a rat’s as long as they’re not owned by a hedge fund slowly bleeding the profits and squeezing journalism out of existence. The Daily is actually supporting my freelance work, and wrote a nice editorial backing quality journalism at the Denver Post.

My dream – fantasy, really – is that someday a coalition of nonprofits, for-profits, civic-minded leaders, whoever values the role of journalism in our democracy, will come together to form a news network that can fund stories on an per-project or subject-oriented basis by the many great journalists like Jason Blevins and Allen Best and so many others seeking a wider audience.

In the meantime, those of us still in the game will keep battling the vultures … wherever they’re perched.