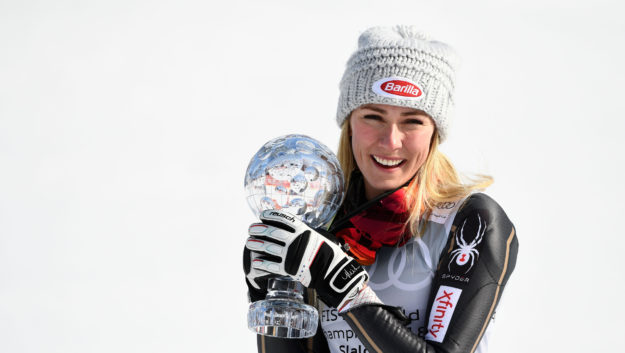 Saturday’s win was the 43rd of Shiffin’s stellar career and vaulted her into sole possession of No. 5 on the all-time women’s victory list — just three wins behind retired Austrian great Renate Goetschl in fourth with 46 wins.

Shiffrin also collected her American record-tying 12th win of the season and can snap that record with a win in Sunday’s giant slalom. Here’s the press release from the U.S. Ski and Snowboard Team:

Mikaela Shiffrin (Eagle-Vail, Colo.) put on another dominating performance to win her seventh FIS Ski World Cup slalom race of the season Saturday in Are, Sweden.

Shiffrin build almost a half-second first run lead, then absolutely ripped down the second run to win by 1.58-seconds over Wendy Holdener of Switzerland, who finished second, and Olympic slalom champion Frida Hansdotter of Sweden in third.

“To finish with a run like that was just super special,” Shiffrin said after capturing her fifth World Cup slalom crystal globe, and her second-consecutive overall World Cup title this season.

“That’s just a dream,” Shiffrin said of her second overall title. “It’s so unbelievable in a way. But first I have a race to do tomorrow and I’m really excited for that, and after today, I’m really looking forward to going to the start one last time this season and hammering down.”

In winning the World Cup overall title last season, Shiffrin utilized her strong tech skills. However, this season she expanded her skill set to include select downhill and super-G events, which included winning her first World Cup downhill at Lake Louise in December. But as the season wore on, she re-focused her energy back to the tech events.

“It’s always difficult, there are always so many challenges during the season, and throughout the year all the girls kept picking up the pace and I felt like I had to step back from speed in order to stay on top,” she said. “But it’s so nice to be at this part of the season and feel like I still put out some of my best skiing.”

Up next, Shiffrin shoots for her 44th career World Cup win in giant slalom Sunday in Are.