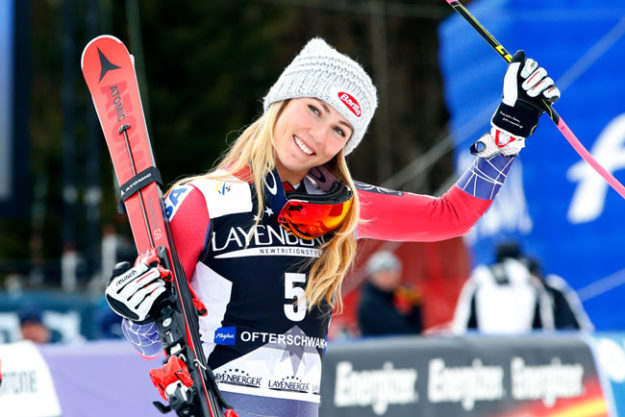 EagleVail’s Mikaela Shiffrin locked up her second-straight overall World Cup title Friday with a third-place finish in a giant slalom at Ofterschwang, Germany.

“That’s really exciting, for sure. It’s hard to explain that feeling really,” Shiffrin said, according to the Associated Press. “To have the overall locked in now before going to Are is pretty cool.”

Shiffrin now has a 603-point overall lead over Switzerland’s Wendy Holdener, who needed to finish in the top two to keep her mathematical chances alive, but wound up 14th.

The World Cup continues on Saturday with a slalom in Ofterschwang, followed by one race each of every discipline at the World Cup Finals in Are, Sweden.

Shiffrin, a two-time Olympic gold medalist, joins Vail’s Lindsey Vonn as the only American woman with multiple overall World Cup titles. Vonn holds the American record with four season titles, which tally all the points in all the disciplines throughout the entire World Cup season.

Shiffrin has won 10 times so far this season and 41 for her career – sixth most all-time among women. The American record for wins in a season is 12 – held by none other than the all-time women’s victory leader, Vonn, with 81.

Friday’s GS was Shiffrin’s first race since winning a silver in the combined event at the 2018 Pyeongchang Winter Olympics in South Korea last month. She also won a gold in the GS to go with her gold in slalom from the 2014 Sochi Winter Olympics.

Shiffrin was heavily favored in the slalom at Pyeongchang but finished just off the podium in fourth.

“It’s been a big battle for me mentally to know exactly where my focus should be,” Shiffrin said Friday, according to the AP. “The best thing for me now is to have the crystal globe already locked in. I can really just enjoy the last races and not have to fight for points to win the globe.”

Rebensburg all but wrapped up the season GS title, and Shiffrin is now out of the running for that crystal globe, but she still leads the hunt for the season slalom title by 175 points.

“For sure I have a big lead,” Shiffrin said. “But nothing is impossible, so I am going to stay focused.”

But the largest globe is now hers heading in Are.

Here’s the press release from the U.S. Ski and Snowboard Team:

Shiffrin came into Friday’s race, her first since winning the gold medal in giant slalom and silver in alpine combined at the 2018 Olympic Winter Games, with a 561-point lead over Switzerland’s Wendy Holdener, who finished 14th Friday.

“It’s an incredible moment right now,” Shiffrin said. “After last year when I won the overall, some people were saying it was sort of fake ‘because the other girls weren’t there and there was nobody to challenge her.’ So to have the overall this year locked in already before we go to (World Cup) Finals, it feels like a confirmation for me.”

Shiffrin now carries a 603-point lead into next week’s World Cup Finals in Are, Sweden, and mathematically clinches her second-straight overall World Cup title. Shiffrin can clinch the World Cup slalom title Saturday with a 10th-place or better result in Ofterschwang.

Up next, the women compete in a slalom Saturday in Ofterschwang.