Vail's Vonn, in her final Olympic event, straddes a gate in slalom after winning downhill 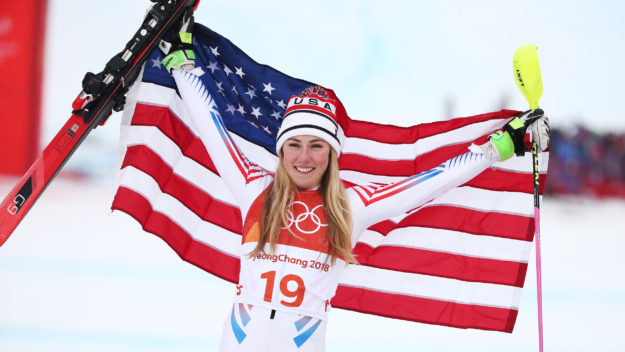 By winning a silver medal in the alpine combined event on Thursday (Wednesday night in the United States) at the 2018 Pyeongchang Winter Olympics, EagleVail’s Mikaela Shiffrin joined a very short list of four Americans who have won three or more Olympic medals in alpine ski racing.

Vail’s Lindsey Vonn, who led after the downhill portion of the combined but straddled a gate and failed to finish the slalom, joined the list earlier in the week with a bronze medal in the downhill at Pyeongchang, adding to her gold in downhill and bronze in super-G from the 2010 Vancouver Winter Olympics. Vonn, 33, was competing in her final Olympics.

Shiffrin, barring injury, can add to her total of three medals — gold in slalom at the 2014 Sochi Winter Olympics, gold in giant slalom at Pyeongchang and now silver in combined — at the 2022 Beijing Winter Olympics. Shiffrin turns 23 next month and will be just 26 when China rolls around.

Shiffrin also joined Mancuso and Miller as the only Americans who have ever won Olympic medals in three or more alpine disciplines. Miller holds the record with medals in GS, super-G, combined and downhill. So Shiffrin can take aim at that record at the next Olympics as well.

Miller is also second on the all-time alpine Olympic medal list behind only Norwegian great Kjetil Andre Aamodt, who won eight total medals. Only four women have won more than four Olympic medals, with Anja Paerson of Sweden and Janica Kostelic of Croatia tied for the record of six total medals. Shiffrin is already halfway there.

It does not appear that any of the top Americans will add to their medal haul by competing in Saturday’s inaugural alpine team event, which is being shunned by many of the top racers who are instead moving on to the rest of the World Cup season.

Still, by winning silver Thursday, Shiffrin guaranteed the U.S. its sixth best total of alpine skiing medals in the history of the Games with three. Americans twice have won four medals in alpine (1964 and 1984), twice have won five medals (1980 and 2014) and once won eight total medals (2010).

Mikaela Shiffrin (Eagle-Vail, Colo.) added another Olympic medal to her collection, taking the silver medal in the alpine combined Thursday at the Jeongseon Alpine Center. Lindsey Vonn (Vail, Colo.) racing in her final Olympic event, won the first run downhill, but straddled a gate in the slalom and did not finish.

“To come away from this Olympics with two medals is insane – especially after the schedule changes on both ends of the event,” said Shiffrin, who opted to sit out the downhill to focus on the combined after the event was rescheduled to Thursday. “It was like someone was playing a game of ping-pong in my brain.”

“With my downhill today, I had a bit too much of a bobble at the top on the traverse to really feel comfortable sending it like crazy,” Shiffrin said. “After I made that mistake, I tried to be solid on my skis and not take too many risks, because for me, it doesn’t make sense to take a lot of risk on the downhill – for what? – I am not at that level yet. I knew I wasn’t going to win the race on the downhill today. Knowing it was a two-run race, I did what I could with the downhill and then switched my focus to the slalom.”

Alice Merryweather (Hingham, Mass.) finished 15th in her first Olympic event. Shiffrin closes out the 2018 Games with a gold medal in giant slalom, fourth in slalom and now a silver medal in the alpine combined. Vonn closes out her Olympic career with three medals – bronze in Wednesday’s downhill; bronze in super-G and gold in downhill at the 2010 Games in Vancouver.