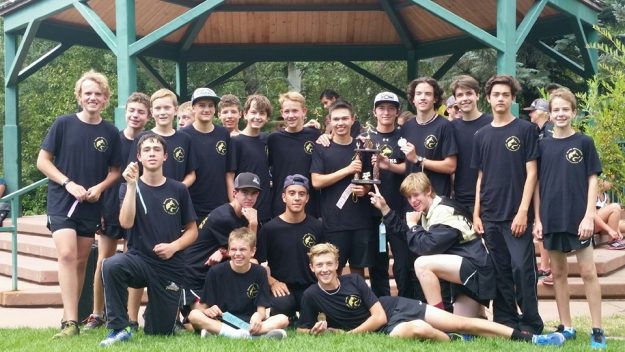 Battle Mountain’s JV team, shown here after winning its home meet in Beaver Creek, will be raring to go Saturday in the Eagle Valley Invitational.

There’s so much going on this coming weekend it’s hard remember anything remotely resembling an off-season in the Vail Valley. For me, I’ll start the weekend by supporting the 6th annual Eagle Valley Cross Country Invitational high school race in Gypsum and running in the Devil’s Dash 5K citizens race beforehand.

Just like the Battle Mountain Invitational over Labor Day weekend, the open race is a fundraiser for Eagle Valley’s high school cross-country team and therefore, in my opinion, a very good cause. The citizen’s race starts at 9 a.m. on Saturday, Sept. 17 (along with the middle school race) and is followed by the boy’s high school race at 10 a.m. and the girl’s race at 10:45 a.m.

The Devil’s Dash is $10 if you pre-register by Sept. 15 and $15 day of the race. There’s also at kid’s 1K and Fun K that’s $5 or free with a paying adult. Go to the WECMRD website to register or stop by the Gypsum Rec Center.

Located at the Gypsum Creek Golf Course, the Eagle Valley Invitational course is not nearly as grueling as the Battle Mountain meet at Beaver Creek, but it’s still at altitude and on a very fast and fun course.

MileSplit Magazine is touting the Battle Mountain Invitational course as the toughest high school cross-country track in the nation, and it’s hard to argue that point when the first mile is seemingly straight up a ski area in excess of 8,000 feet in elevation. Here are some photos from the Sept. 3 race, won in all four categories by Battle Mountain.

I ran the “toughest-in-the-nation” course in 30:56 and was a distant second in the 50-plus age category to Eric “Prefontaine” Fitzcharles, who killed it with a sizzling time of 25:52. For some context, the top boy’s high school time was 18:30, which is insane on that course.

The main thing, though, is that I accomplished my stated goal of dominating 40-year-old Tom Boyd, who came in at 31:45 after beating me the year before. Boyd, in fact, was too intimidated to compete in Gypsum on Saturday.

But anyone else looking for a good run and a great cause, as well as an excuse to come out and cheer on some of the most dedicated high school athletes in the Vail Valley, should head down to Gypsum on Saturday.

Eagle Valley showed very well at the Battle Mountain race and will be highly motivated on their home turf. Yes, the rivalry does extend beyond soccer and football. Devils’ coach Melinda Brandt has her squad in top form, with the girls coming off a victory in Grand Junction on Friday. The Battle Mountain girls, meanwhile, were third against a brutally tough field in Lyons on Saturday, and coach Rob Parish once again has the Huskies hitting on all cylinders.

After the race I’ll be dashing back up valley to help wash cars at Berry Creek Middle School, where we’re raising money from 9 a.m. to 2 p.m. for a class trip to Washington, D.C., and New York City in May. There will also be a bake sale and a yard sale, so please come by, get your car washed after this week’s rain and possibly even snow, and support a really good educational cause.

And finally, speaking of good causes, with everything else going on it looks like I won’t be able to attend one of my favorite annual events — Vail Resorts’ Epic Promise volunteer trail work day, which I participated in and wrote about last year on RealVail.com.  But that shouldn’t stop you. Get out, enjoy the fall weather and work on our incredible and well-used trail system.

The Forest Service can’t keep up as Congress keeps slashing its budget and more and more USFS money goes to fighting wildfires. Be sure to tell your congressman you’d like to see separate funding for firefighting as global warming makes that more and more of an unfunded necessity, while management of public lands becomes less and less of a priority in an increasingly partisan political environment.