Eagle-Vail’s Mikaela Shiffrin powered through a rutted, sloppy slalom course in Bormio, Italy on Sunday to claim the sixth World Cup victory of her career, just over a month from the start of the 2014 Winter Olympics in Sochi, Russia.

“It was definitely a fight,” Shiffrin said of her .13-second victory over hard-charging Marie Pietilae-Holmner of Sweden. “I was really psyched to win again. It’s been a fight all season, and I feel like if I’m not perfectly ready then the win goes to somebody else. 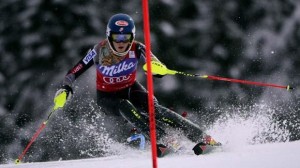 “So I was really trying to prepare myself to be ready to go today no matter what the conditions or the visibility. Having that mentality makes everything better. It was tough conditions, but I was ready for it.”

“There’s been a lot of stories about the Mikaela and Marlies battle and it’s exciting,” Shiffrin said. “It creates a cool atmosphere around ski racing. It’s like Lenzerhiede last year when [overall champion] Tina [Maze] won the first run and I won the second. That kind of a battle creates a really great story for the athletes as well.”

Shiffrin led by a scant .03 seconds after the first run and then held off Pietilae-Holmner in the second run.

“I did really want to win, but so did Maria [Pietilae-Holmner]; I think a lot of girls did,” Shiffrin said. “In these conditions, it’s just making the least amount of mistakes, and I walked away with the win. I’m very excited with how my season is going right now and I think I can do better too, so we’ll just have to keep working on it.”

Shiffrin tied Vail’s Cindy Nelson and Edwards’ Kristina Koznick (both retired) for fifth on the career victory list for American women with her sixth win. Californian Julia Mancuso, who holds the record for most Olympic medals (three) by an American woman, is next on the list with seven World Cup wins. Mancuso will be among the favorites to add to her medal tally in Sochi.

After Mancuso, only three other American women – Picabo Street (nine), Tamara McKinney (18) and Vail’s Lindsey Vonn (59) – have won more times on the World Cup circuit. Vonn is the only active racer among those three, although she’s skiing without an intact anterior cruciate ligament in her right knee and may not race again until Sochi.

Shiffrin, 18, has now captured 13 World Cup podiums, making her the youngest alpine skier in U.S. history to accomplish that feat. Her sixth slalom win also moves her to second on the all-time list among American women, trailing only McKinney’s nine career slalom wins.