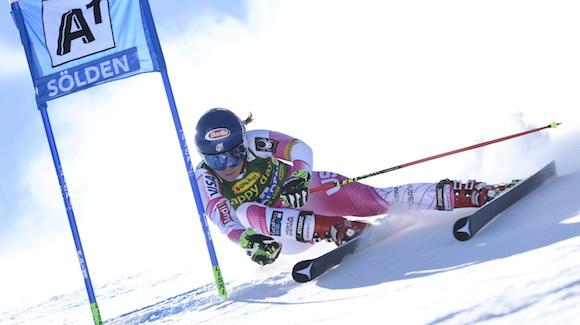 Here’s the full press release from the U.S. Ski Team:

It was a beautiful bluebird day with grippy snow, and Gut—last season’s overall World Cup winner—took advantage of the conditions.

Shiffrin looked strong after starting 16th first run, but couldn’t keep up with Gut’s flawless first run. Gut led Shiffrin by 1.42 seconds after the first run and while Shiffrin stayed on her heels second run, the lead was too great and Gut nabbed the win. Behind Shiffrin was Marta Bassino of Italy, who stepped on her first World Cup podium in third place.

“Lara’s performance was really impressive,” said Shiffrin after the race. “I know that I had really, really good preparation coming into this race. I felt good about where my skiing was, so when she comes down and she’s that far ahead and taking every gate like it’s the last gate she’s ever going to ski, it’s really cool to see. But I’m gunning for the rest of the races!”

Shiffrin was not shy about her discussing her goals for GS this season, highlighting the upcoming Killington World Cup and stating that she’s going for the GS globe. “Right now, my focus is the slalom globe and GS globe,” said Shiffrin. “I really, really want to win GS races, even more than I want to win the overall globe.”

The women have a break before heading to Levi, Finland on November 12 for a slalom and then come back to the U.S. for the Killington World Cup.

The men race giant slalom Sunday with Ted Ligety (Park City, UT) going for the win. Stream the race live on nbcsports.com and watch the race on NBCSN at 9:30 p.m. ET.