Eagle-Vail’s Mikaela Shiffrin climbed onto her first World Cup giant slalom podium Sunday with an inspired pair of runs on the new Raptor course at Beaver Creek, salvaging a disappointing Thanksgiving weekend for the American women on a course that will be used for the 2015 World Championships. 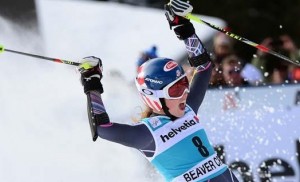 Shiffrin turned in a smooth final run that nearly snatched the win away from Jessica Lindell-Vikarby of Sweden. Shiffrin’s second-place finish marks the first time she’s finished on the podium (top three) in a World Cup GS.  The 18-year-old’s previous best in GS was sixth in the opening World Cup this season at Soelden, Austria, in late October.

Shiffrin, a world champion in slalom last season, already has five career World Cup wins in that discipline, including a win last month at Levi, Finland.

Shiffrin was just .09 seconds off the pace of Lindell-Vikarby at Beaver Creek on Sunday, thrilling her hometown crowd. Tina Weirather of Liechtenstein finished third.

“It’s my first GS podium and I’ve been working on my GS so it’s a big relief to be able to get on the podium and know that I’m actually doing something right,” Shiffrin said. “It’s my favorite slope and two amazing courses with awesome conditions. I don’t really think they could have done much better with this hill today, so I just tried to take advantage of that.”

Lara Gut of Switzerland, who won the opening GS in Soelden, was going for a clean sweep on Raptor after winning Friday’s downhill and Saturday’s super-G but failed to finish her first run. The best result by an American in the speed events was a 19th Friday by Stacey Cook.

Shiffrin said the sensation of skiing on home snow was amazing.

“This hill is my favorite hill because it feels so good to make good turns and to arc the turn. That was my goal and I think I accomplished it pretty well,” Shiffrin said. “It wasn’t really nerves that were getting me down the hill. I wanted to race. I couldn’t wait to get out of the starting gate. That was the coolest feeling for me so I’m going to try and take that into the next races.”

She added she can’t wait to ski here again during the World Championships next season.

“The crowd was amazing,” she said. “It’s going to be incredible to come back here next winter where I hope to defend my World Championship slalom title and hopefully compete for a few more medals.”