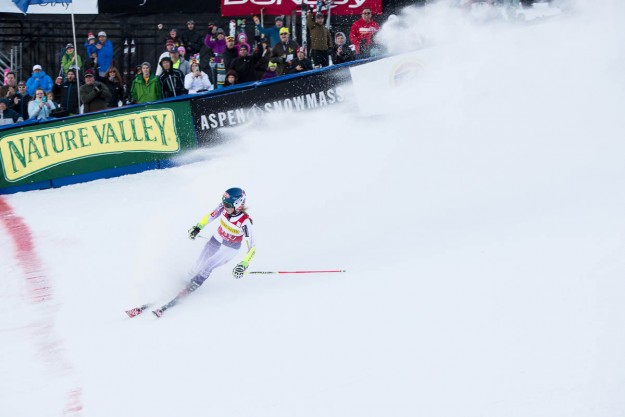 Not a GS specialist, Shiffrin was late on a gate midway through her first run and had to scrub tons of time to recover and stay on course. She was fifth best, however, in her second run.

“I’m very thankful for this moment — totally proud and happy,” Brem said. “I wasn’t nervous at the start. I just tried to fully attack and in the end it was good enough.”

Shiffrin, 19, has won nine World Cup slaloms and will be a favorite in Sunday’s slalom at Aspen, but she’s still finding her way in GS. She was fifth in the Olympic GS earlier this year but won the gold in slalom at Sochi.

“It seemed like an insurmountable gap,” Shiffin said of her first-run mistake. “But as I keep improving my skiing and building my confidence, I might be able to make up a gap like that someway. I felt like I did a great job attacking in the second run and it was a step in the right direction.

“I’m actually pretty psyched with my day. I don’t tend to make mistakes — ever. For me to attack hard enough to make a mistake is almost a breakthrough. It’s just tough that it cost me a lot of time today, but it was a learning experience.”

No American woman has won at Aspen since Tamara McKinney claimed a GS win in 1981. Shiffrin hopes to change that on Sunday.

“It was so cool to be here in Aspen,” she said. “You could hear the fans at the start and it kind of got me psyched up.”

The Winternational weekend continues Sunday with the ladies slalom first run at 10 a.m., followed by the second run at 1 p.m. The Sunday slalom final will be broadcast live in HD on NBC at 1 p.m. MST.