The youngest slalom gold medalist ever at the 2014 Winter Olympics in Sochi, Russia, Shiffrin, 20, still isn’t legally old enough to drink in the United States, but she will once again be well-supplied with pasta products for carbo-loading on the World Cup circuit this season as she goes for her fourth consecutive slalom title. 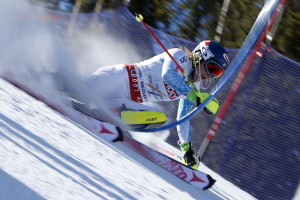 Both the women and the men open up the World Cup circuit with giant slalom races in Soelden, Austria, Oct. 24-25. Then after slalom races in early November in Levi, Finland, the women are in Aspen for the annual Winternational slalom and GS races on Thanksgiving weekend.

Here’s the full press release from Barilla on re-signing Shiffrin:

The 20-year-old alpine skier, who will continue to wear Barilla’s® iconic logo on her helmet, returns to the slopes after an extremely successful 2014-2015 campaign, which saw her become the youngest slalom gold-medalist in Olympic alpine skiing history. She also won her third-consecutive World Cup slalom title last year. Shiffrin is set to begin her World Cup slalom defense on October 24, in Sölden, Austria.

The newly announced extension between Barilla® and Shiffrin marks the fifth year of a partnership based on shared values.

“It’s been a tremendous privilege to support Mikaela and to be there as her skiing career took incredible flight over the past few years,” said Melissa Tendick, Vice President Marketing, Region Americas at Barilla®. “Mikaela is a wonderful ambassador for the Barilla® brand, and demonstrates the positive benefits of good nutrition. Our hope is that athletes at every level – including today’s youth – will consider including pasta in their diets as a sustainable energy source.”

“I make sure to eat balanced meals, including a portion of pasta every day,” Shiffrin said. “It’s easy to add dairy and veggies for a quick, easy, delicious and nutritious meal any time. With my rigorous training and travel schedule, I need a protein rich meal that I can easily cook no matter where I am – which is why I love Barilla® ProteinPLUS™.”

“I’m very proud to have the continued support of Barilla, which is a great, family-owned company. I’ve been part of the Barilla® family since 2012 – which has been amazing!”

For product information, healthy pasta recipes, tips and more, visit at www.Barilla.com or join Barilla® on Facebook at Facebook.com/BarillaUS.