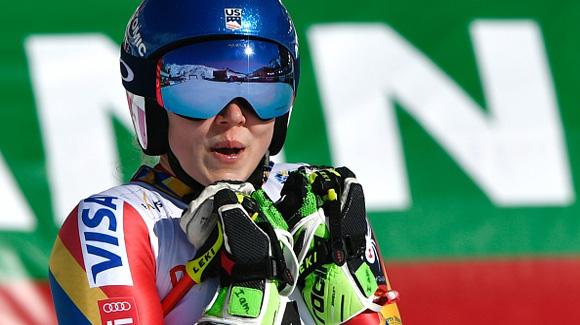 Eagle-Vail’s Mikaela Shiffrin announced herself as a force to be reckoned with in giant slalom on Thursday, claiming a silver medal in the event at the World Alpine Ski Championships in St. Moritz, Switzerland.

Shiffrin was .34 seconds behind Tessa Worley of France, who won her second gold medal of these World Championships. Sofia Goggia of Italy was third — .74 behind Worley.

“Tessa deserves winning this, she’s done so well all season,” Shiffrin said, according to the International Ski Federation. “She had such a big lead after the first run that I knew it would be tough to top. For a bit I thought I had done enough, but it was clear that she was the best today and deserves the gold medal.”

Shiffrin is her generation’s dominant slalom skier, with 24 of her 28 World Cup wins coming in that tech discipline. But she’s been coming on in GS, winning two races this season and now claiming her first ever World Championship or Olympic medal in the event.

After knocking on the door in GS for years, Shiffrin can now says she’s a medalist. In the last two World Championships — both of which saw her win gold in slalom — Shiffrin has finished sixth and eighth in GS, including on her home snow at Beaver Creek in 2015.

At the 2014 Winter Olympics in Sochi, Russia, Shiffrin was fifth in GS but became the youngest slalom champion in Olympic history at the age of 18. She’ll be a heavy favorite to win her third straight slalom world championship on Saturday.

Shiffrin finished third in the first GS run, then stepped it up for the second run, especially on the bottom of the course with her strong finishing style.

“First run I felt like I left something out on the hill, second run I really felt like I attacked,” said Shiffrin, who was eighth in GS in 2015 at Beaver Creek, and sixth in Schladming, Austria in 2013. “It was really fun the ski.”

Shiffrin, the two-time defending slalom World Champion, is now focused on Saturday’s slalom, the final event of the 2017 World Championships.

“It’s not so hard to carry momentum when you have good momentum going,” she said.  “I’m just going to try to ride this wave, get a little training tomorrow, and then go out and try to attack on Saturday.”

QUOTES
Mikaela Shiffrin
First run I felt like I left something out on the hill, second run I really feel like I attacked. It was really fun the ski.

It was a beautiful day to be ski racing. I wasn’t sure if I could make up all the time on Tessa. But she deserves to win.

[On the course conditions]
It was actually really good for the second run. Sometimes it gets really peely with the sun baking the surface, but there was something underneath, and I was almost surprised with how good it was.

[On Saturday’s slalom]
It’s not so hard to carry momentum when you have good momentum going. I’m just going to try to ride this wave, get a little training tomorrow, and then go out and try to attack on Saturday.