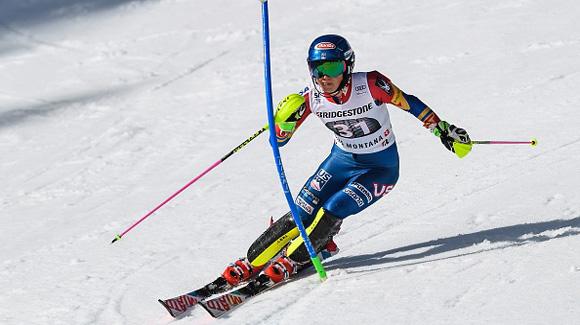 Eagle-Vail’s Mikaela Shiffrin picked a great time for the first World Cup alpine combined win of her career, stomping the competition by .70 seconds and gaining precious overall points over her nearest pursuer, Ilka Stuhec of Slovenia.

Stuhec, who had been steadily chipping away at Shiffrin’s overall lead the last two days, finished third in Sunday’s combined event, which combined the fastest times in one run each of super-G and slalom.

Shiffrin picked up 100 points for the win, and Stuhec nabbed 60 for finishing third, giving Shiffrin a net 40-point gain in the chase for her first overall title and only the sixth by an American woman.

Vail’s Lindsey Vonn, who did not race Sunday due to a case of food poisoning and a crash in Saturday’s super-G, holds the American record with four overall World Cup titles, which awards a globe to the ski racer who accumulates the most points throughout the course of the entire season.

Shiffrin is vying to join Vonn and Tamara McKinney as the only American women to ever win the overall title. On the men’s side, only Bode Miller (two) and Phil Mahre (three) have accomplished the feat.

Sunday marked the ninth victory of the season for Shiffrin, who now holds a 298-point lead over Stuhec (1,323 to 1,025) with only three World Cup events remaining, including two on American snow, where Shiffrin has been dominant in the tech events of giant slalom and slalom.

Now Shiffrin is starting to show she can compete in the speed events of downhill and super-G as well.

Sunday was only the second combined event start for Shiffrin, who started way out in 31st position in the morning super-G because of her lack of experience in the speed event. But she posted the seventh fastest time in the super-G, 1.30 seconds behind the leader, Sofia Goggia of Italy.

Then Shiffrin showed what a three-time world champion and Olympic champion slalom skier can do in her signature event, winning the afternoon slalom by .35 seconds and a much wider margin over speed-event standouts like Stuhec, who did claim the alpine combined discipline title on Sunday.

Of her 29 career World Cup victories, which incredibly ranks her 11th on the all-time list at the age of 21, Shiffrin now has 24 slalom wins, 3 GS wins, one parallel GS win and a combined event win. Her next World Cup win will tie her for 10th all time with retired Croatian great Janica Kostelic.

Vonn tops the all-time women’s list with 77 career wins at the age of 32.

The women’s World Cup now shift to Jeongseon, South Korea — site of the 2018 PyeongChang Winter Olympic alpine events — for a downhill and a super-G. Then the White Circus heads back to the States for a slalom and GS in Squaw Valley and the World Cup Finals in Aspen next month.

Shiffrin told Ski Racing Magazine she’s going to South Korea to check out the tech venues but won’t compete in the speed events.

“We’re flying out tonight,” Shiffrin said. “But I’m not going to race in the speed events. I’m going to try to see the speed hill, get on the tech venue a little bit and then, go to the U.S.”

At most, Stuhec could trim 200 points off the overall lead with victories in both the downhill and super-G in South Korea.

“As for my overall lead, I think Ilka’s going to put up a really good fight,” Shiffrin told Ski Racing. “So, I’m certainly not losing focus.”

Here’s the full press release from the U.S. Ski Team:

Racing once again under brilliant blue skies and on a soft track, Shiffrin laid down a solid first run of super G, and then attacked the second run slalom to take the victory over Italy’s Federica Brignone in second, and Slovenia’s Ilka Stuhec in third.

“I was really psyched with my super G this morning,” Shiffrin said. “I took a really big step forward from yesterday and I was happy with that. Of course the slalom was great; I made a little mistake at the top, but I was attacking so I don’t think it cost me too much. I’m happy to go into the U.S. races with the overall lead.”

Stacey Cook (Mammoth Mountain, CA) was the only other U.S. finisher in 23rd. Laurenne Ross (Bend, OR) was 14th in the super G, but did not finish the slalom run.

With her victory, Shiffrin picked up 100 World Cup points and now leads Stuhec by 298 points with four World Cup races remaining before the World Cup Finals in Aspen, CO, March 13-19. Shiffrin also leads the overall World Cup slalom standings and is second in the giant slalom standings, 120 points behind Tessa Worley of France.

“As for my overall lead, I think Ilka is going to put up a really good fight, so I’m certainly not losing focus,” Shiffrin said.

QUOTES
Mikaela Shiffrin
I was really psyched with my super G this morning. I took a really big step forward from yesterday and I was happy with that. Of course the slalom was great; I made a little mistake at the top, but I was attacking so I don’t think it cost me too much. I’m happy to go into the U.S. races with the overall lead.

As for my overall lead, I think Ilka is going to put up a really good fight, so I’m certainly not losing focus.

[On the spring conditions at Crans-Montana]
It’s soft, and it’s so warm. I actually love the spring weather – I love the sun, it just feels really nice. But sometimes it’s difficult to ski on, especially with the speed. But it’s probably good practice going into the last races of the season.