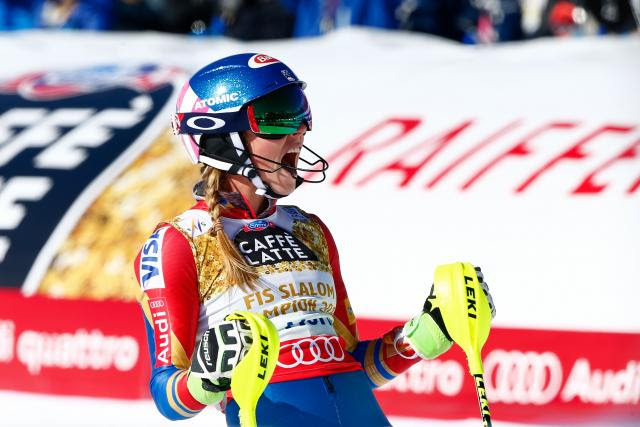 Eagle-Vail’s Mikaela Shiffrin heads into the final month of the World Cup ski-racing season with a relatively comfortable 414-point lead in the chase for the coveted overall title.

With the unfortunate season-ending injury of her nearest pursuer, Switzerland’s Lara Gut, the drama of the overall chase decreased significantly with just four events remaining on the calendar.

Shiffrin now doesn’t even need to consider the speed events of super-G and downhill the next two weekends in Crans-Montana, Switzerland, and Jeongseon, South Korea, and can instead focus on her signatures technical events of slalom and giant slalom on home snow at Squaw Valley, California, and Aspen — site of the World Cup Finals March 13-19.

Shiffrin won the last two races she competed in at Aspen last year and is also riding high after winning her third straight World Championships slalom gold at St. Moritz, Switzerland over the weekend. Here’s that press release from the U.S. Ski Team:

In explosive fashion under a bright blue sky and skiing on a rock-hard course, Shiffrin matched Germany’s Christl Cranz (1937, 1938, 1939) as the only ski racers to win three slalom titles in a row.

Winning the first run by 0.38 seconds over Switzerland’s Wendy Holdener, Shiffrin crushed the second run, on a course set by her coach Mike Day, to extend her margin of victory to 1.64 seconds over Holdener, who finished second, and 1.75 seconds over Sweden’s Frida Hansdotter in third. Resi Stiegler (Jackson, WY), competing in her eighth World Championships, finished 11th. Megan McJames (Park City, UT) was 36th.

“I heard the crowd screaming for Wendy and I knew she must have had a great run, and I just thought you know what, ‘today’s my day, not yours,’” said Shiffrin, who finished the second run with her characteristic explosive fashion, gaining more than a half second from the third split to the finish.

Shiffrin, who just seems to have one extra gear at top speed over the rest of the field, skied a solid first run to shake out the nerves, before cutting loose on the second run.

“My nerves were higher the first run,” she said. “Second run I thought that I’m halfway there, but everything could disappear in one second, so just focus. I felt (my) confidence building and building, and when I got into the gate, I was ready.”

However, the time she spent at the start waiting for her second run after Holdener moved into the lead “felt like I was standing there forever,” she added. “So I just thought, ‘pretend they are cheering for you and go for it!”